On day five of our Rocky Mountain adventure, we woke up at the crack of dawn and began our road trip up the Icefields Parkway. Cell service cut out almost immediately and would not return until the following day, so I pulled out the list I had made of all the stops along the way. The signage was pretty good, but we still would have missed some of the highlights had it not been for my handy list.Our first stop was Herbert Lake. It was just off the road and definitely worth the 30 seconds it took to walk from the car to the lake. Simply beautiful. 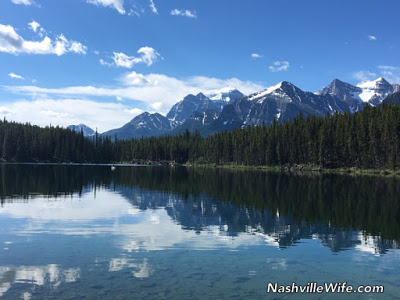 We hopped back in the car and continued driving, passing the Hector Lake viewpoint after 10 minutes but deciding not to stop. About 10 minutes past that was a pull-off that provided a fabulous view of Crowfoot Glacier. Naturally, we snapped a picture from both sides of the road. 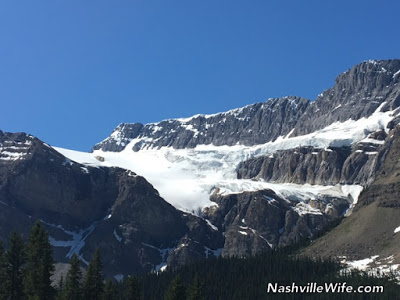 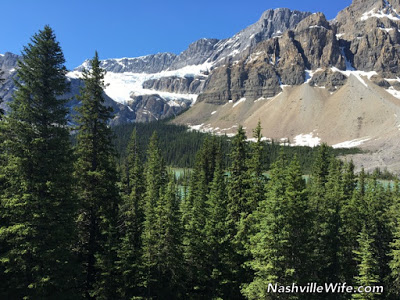 Another short drive (about 8 minutes) and we arrived at Simpson’s Num-Ti-Jah Lodge. My family and I stayed there when I was about eight years old, so I have great memories of that place. 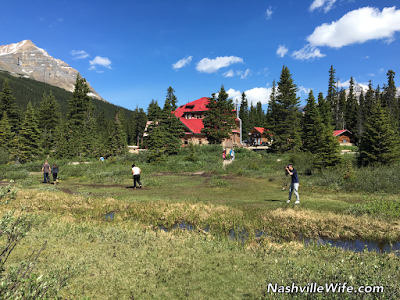 The lodge sits on the rocky shores of beautiful Bow Lake, making it a popular stop for tourists. When I visited as a child, it was an especially chilly summer, and the surrounding mountains were still covered in ice and snow, like a winter wonderland. I remember it vividly. 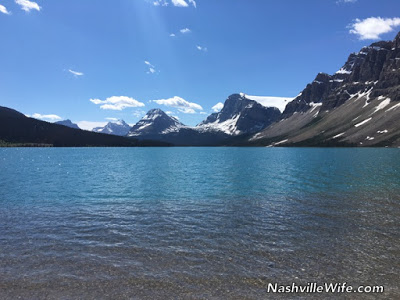 Our next stop was Peyto Lake (another 10 minutes up the road). Named after turn-of-the-century guide Bill Peyto, Peyto Lake is known as “the bluest lake in the Rockies.” 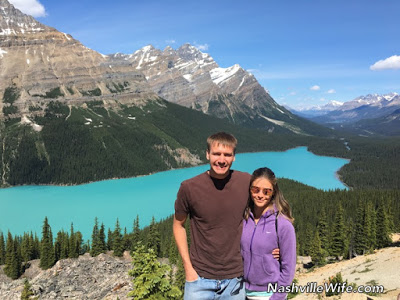 Also in the same location is Bow Summit, the highest point on the Icefields Parkway (2,135 meters/7,000 feet elevation). 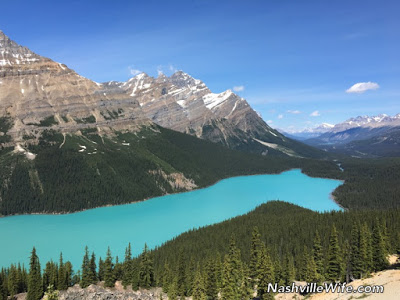 After a 25 minute drive, we stopped at Mistaya Canyon. We walked 0.5 miles down a steep incline and arrived at this spot. 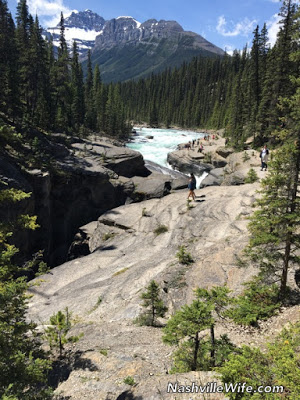 If you look closely, you’ll see the powerful current rushing through the canyon. Truly an incredible sight! There were additional trails we could have hiked, but we were on a tight
schedule, as we had to make it to our glacier tour by 4:00pm. We made the grueling trek up the steep hill and back to our car. 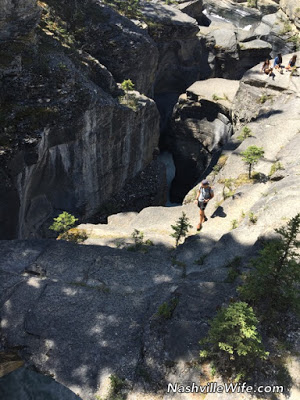 A short five minute drive along the main road brought us to Saskatchewan River Crossing, the first oasis with gas and food that we had hit since Lake Louise. Still no cell reception, though.

Twenty-five minutes later, we made our way up the “Big Hill” and pulled over on the side of the road for a breathtaking view of the North Saskatchewan Valley. 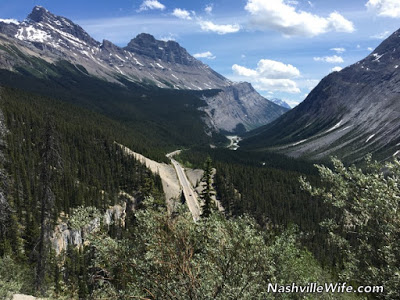 By that point, we were only 10 minutes away from our destination for the night, a large building that houses the Glacier View Inn and the Columbia Icefield Glacier Discovery Centre.

I had called the hotel a few weeks before and booked their very last room that week. What a blessing! It is the only hotel and restaurant for many miles and was the perfect place to stop. But before calling it a night, we still had to take our glacier tour, my most anticipated stop on our entire trip. This has been a long post already, so I’ll have to wait until next time to tell you all about our excursion on the Athabasca Glacier.