Our Rocky Mountain saga continues! If you missed my post about day three, click here to read it.On day four of our trip, we ventured to two of the most iconic locations
in the Canadian Rockies: Lake Louise and Moraine Lake. We arrived fairly early in the morning, but it still wasn’t early enough. Both parking lots were already full, so we ended up parking about a mile away from Lake Louise and walking.The Lake Louise shore was teeming with tourists, but it was totally worth the walk. It truly is a spectacular place! There were quite a few people out canoeing on the far end of the lake. If you look closely, you can see the Upper and Lower Victoria Glaciers behind the lake. 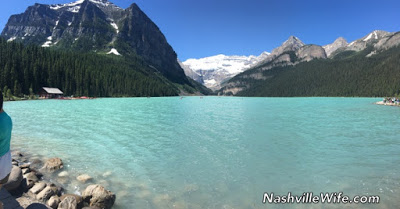 One of the unique things about Lake Louise, aside from the beautiful blue color of the water, is that it offers two hikes to historic teahouses. We were hoping to do the 8.4-mile Plain of Six Glaciers
Teahouse Hike (teahouse built in 1927), but we heard from other tourists that the snow up on top of the glacier was quite deep, so we chose the Lake Agnes Teahouse Hike (a newer teahouse built to replace one built in 1905).

The first half hour of the hike was a steep incline, and the next half hour was steep switchbacks. We arrived at a medium-sized lake that can’t even be seen from the start of the trail. We thought that was pretty incredible, but we were in for an even better surprise! 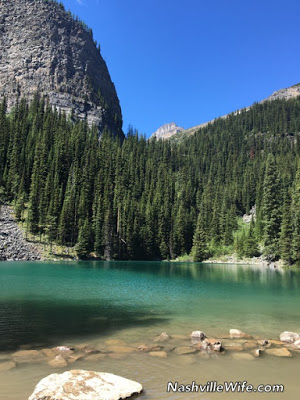 About 20 minutes further, and we made it up to the teahouse. The teahouse itself is a small, wooden structure, but it sits on a lake about 10 times as large as the first! 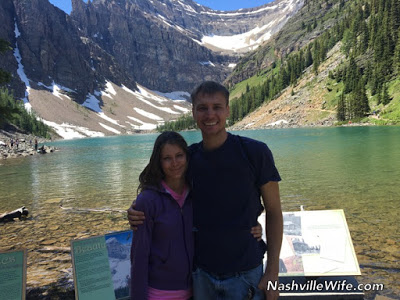 The views were splendid! 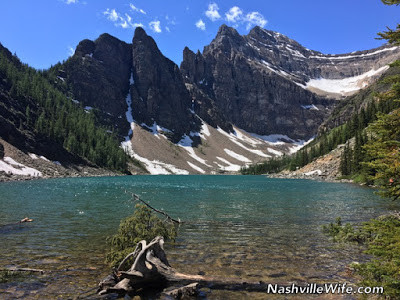 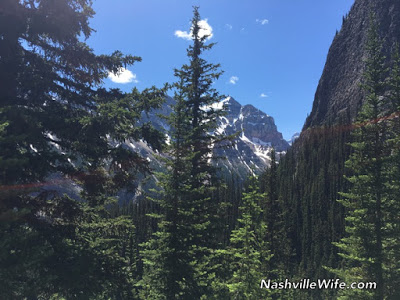 Both Lake Louise teahouses sit on top of mountains, so they are inaccessible by road and rely on horses and helicopters to bring supplies. 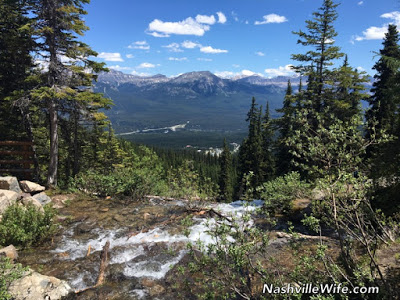 The teahouse was quite busy with hikers enjoying refreshments before going back down the mountain. We took a short break and then decided to
leave the crowds behind and continue on the Big Beehive trail. The trail took us all the way around the lake and through a large patch of snow. Here is the view from the other side of the lake: 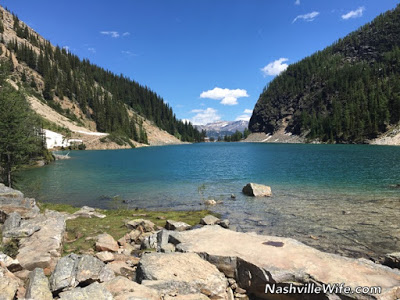 From there, we began the steepest, most harrowing trek of our entire trip, as we snaked up a rocky slope. Looking down was quite frightening! I had a few freak-out moments when I almost lost my balance. 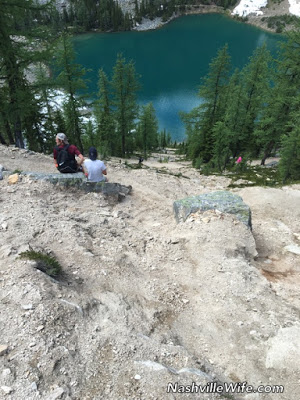 It was rough, but once again, the view was totally worth it. There was hardly anyone up at the top, and we could see for miles. 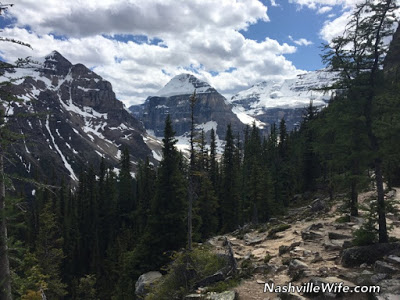 We were directly above Lake Louise and the chateau. The people canoeing on the lake looked like ants. 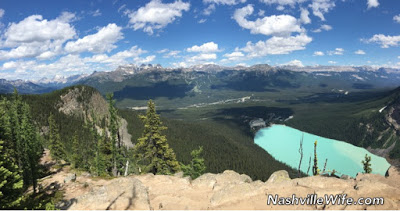 I nearly had a heart attack as Mr. Handsome sat near the edge to take a picture. 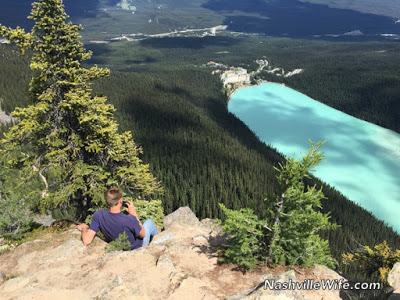 But then I saw another man go even further (while leaning out over the drop-off) and was grateful that my husband wasn’t crazy enough to follow suit. The man’s wife was watching him do this, and she just shook her head and said, “Sometimes I wonder how he’s still alive.” 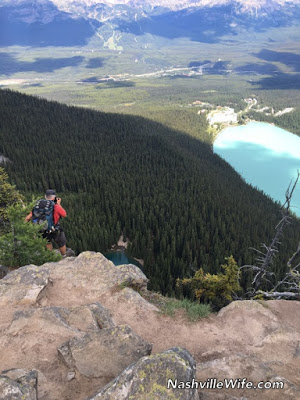 We sat up there for about 30 minutes, enjoying the views. The air was fresh, and the stillness brought a peacefulness unlike any I had ever experienced in nature. 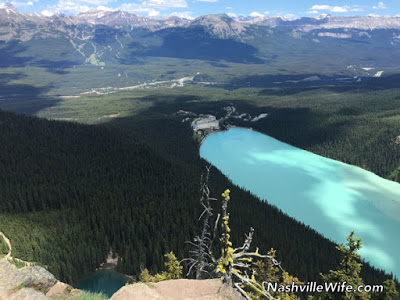 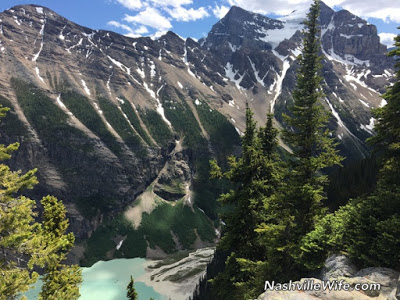 We were exhausted, but I still had to show Mr. Handsome beautiful Moraine Lake before we left the area. I’ll share those photos in another post.