If you’re like me, you’re probably wondering how on Earth it can be Wednesday already. Where has the week gone?I’m thrilled to hear that you have been enjoying my Rocky Mountain posts. If you missed them, click here to view Day 1 and here to view Day 2.

On Day 3, we woke up very sore and tired, following our intense hike up the Iceline Trail. One thing I forgot to mention on my post about Day 2 was Emerald Lake, another beautiful spot in Yoho National Park. We didn’t have time to visit after our long hike, but if you’re in the area, I highly recommend it. The access road is located just west of the town of Field, British Columbia.

We “slept in” until 7:00 and spent a relaxing morning on a group fishing charter on Lake Minnewanka, located about 15 minutes northeast of Banff Townsite. 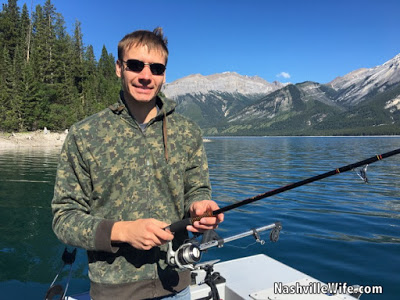 As you know, Mr. Handsome is a fishing enthusiast, so he was eager to get a pole in the water. 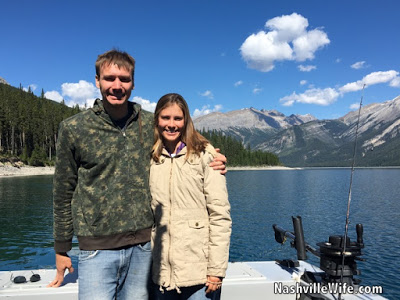 Most of the fish species were catch and release only, but determining which was which didn’t turn out to be an issue. We didn’t catch a thing.

Canada is celebrating its 150th anniversary with free park admission, so 2017 is projected to be one of the busiest years on record in Banff. We also chose one of the busiest weekends of the year, as we visited over Canada Day. And it had rained the day before. So the fish had many reasons to stay far away from our hooks. 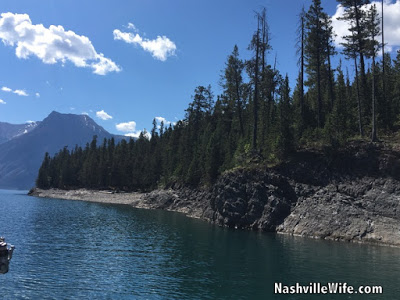 The scenery surrounding Lake Minnewanka made up for the lack of fish. It is among the most well-known fishing spots in Canada, so there was a decent amount of lake traffic, but our guide was able to find some secluded spots to fish. Mr. Handsome says it was by far the most beautiful place he has ever fished. 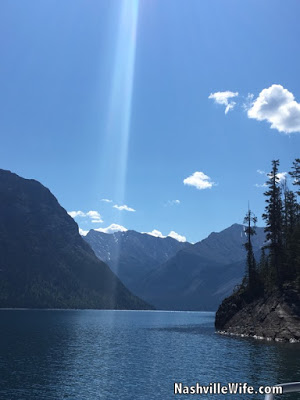 Lake Minnewanka is a glacial lake that is 142 meters/466 feet deep, so the water is cold. If we were to fall in, the guide advised us to keep our mouths closed to prevent us from swallowing the frigid water and going into shock. Now that’s a comforting thought. 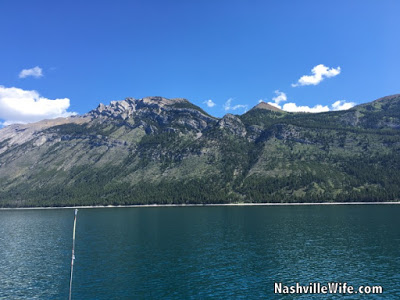 After our fishing excursion, we drove 25 minutes southwest to Sunshine Village, a ski resort that doubles as a summer tourist attraction. I made some delicious peanut butter and jelly sandwiches, and we headed to the gondola. The ride was about 20 minutes long, and although our gondola could have fit eight people, we had it all to ourselves. 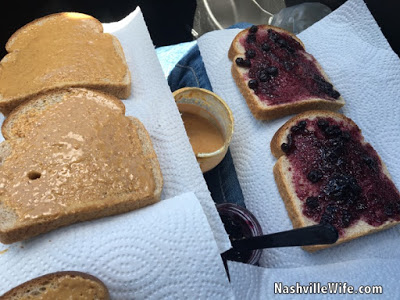 I grew up downhill skiing, so I felt right at home on the mountain. Sunshine brands themselves as a family-friendly ski resort, although they have two runs (Wild West and Delirium Dive) that are among the most extreme ski hills in the world. 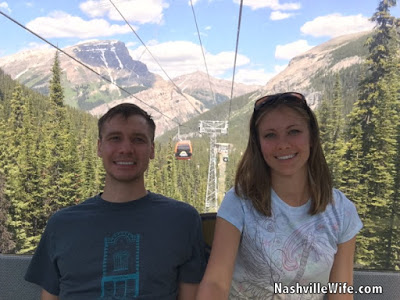 At a 55-degree gradient, Delirium Dive is only open to guests with an avalanche pack, a beacon, and a shovel. I’ve done my fair share of black diamond hills, but I can say with certainty that I would never venture down Delirium Dive. 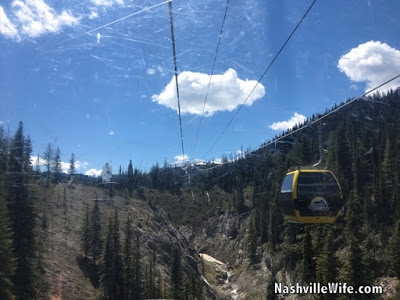 The gondola starts at an elevation of 1,660 meters/5,440 feet and lets off at 2,164 meters/7,100 feet. After hopping off the gondola, we walked over to the Standish Chairlift, which shuttled us up to an even higher elevation (2,400 meters/7,875 feet). At that point, we were on the Continental Divide.

From the top of the Continental Divide (also known as the Great Divide) rain or melting snow either flows west toward the Pacific Ocean or east toward the Atlantic Ocean.

The view was other-worldly. It truly felt like we had stepped into a fairy tale.

The mountains seemed to go on forever in every direction. We were shocked that there were only a small number of tourists on top of Sunshine. Folks just don’t know what they’re missing! 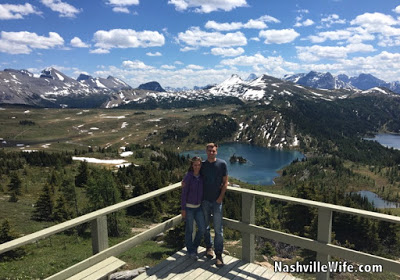 Here’s a video we made from the lookout point:

After taking in the spectacular views, we hiked down to the lake and back to the base of the chairlift. The longer trails were closed due to grizzly bear threat and snow, so we only walked 3 km/2 miles through Sunshine Meadows. Seeing patches of snow next to beautiful summer wildflowers was a strange juxtaposition. 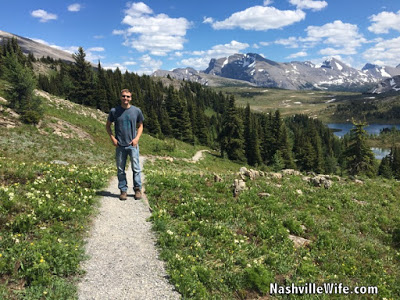 We finished off our jam-packed day with a visit to iconic Johnston Falls, located halfway between Lake Louise and Banff along Bow Valley Parkway. Even at 6pm, the path to the falls was packed, but it was still unique to walk along the inside of a canyon with a rushing river below. 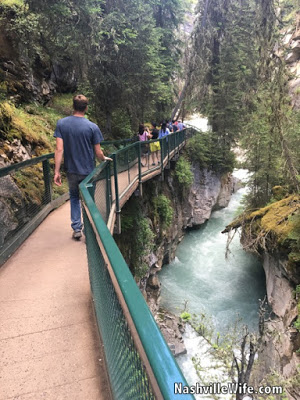 After we reached the first waterfall, the number of people dropped by quite a bit. 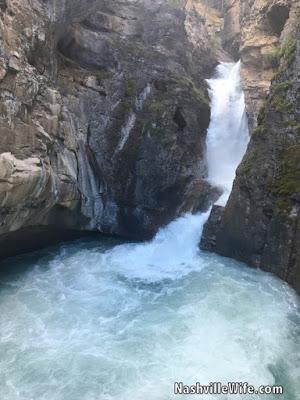 We stood in line to walk through a small cave to the base of the falls (had to keep our cameras away from the spray) and then kept trucking along. 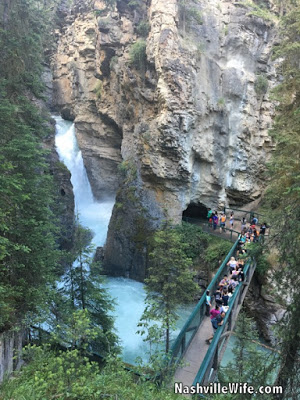 The hike was only 3 km/2 miles total, but the elevation increased steadily the entire way there. 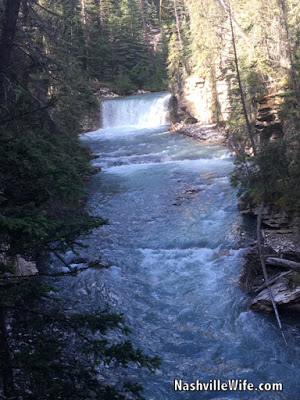 The second waterfall was definitely more beautiful than the first. We could have continued another 3km to the Ink Pots (seven bubbling mineral springs), but we opted to call it a day. We rewarded ourselves with ham and cheese sandwiches from Safeway. 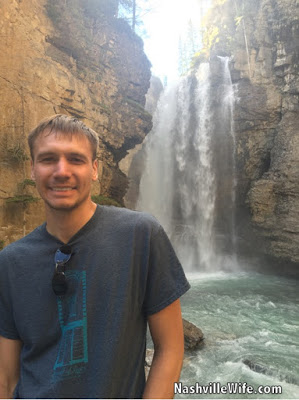