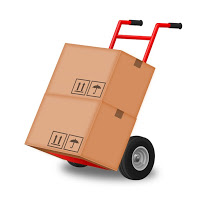 Thank goodness it’s Friday! We have had a very busy summer. Just a week after returning from the Canadian Rockies, we moved into a new place.

Anyone who has moved at least once in their life (which is probably most folks) understands what a huge undertaking it is to gather up everything you own and transport it to a new location.

I started packing a box every day about a month in advance. Visitors to our house gave me strange looks when they saw boxes stacked in the corners and found out we weren’t moving for another few weeks, but I am so glad I started early. The packing process ended up taking much longer than I had expected.

I had about 20 boxes saved from our previous move and had to acquire 10 more. (A word to the wise: Rather than paying for moving boxes, ask local grocery and clothing stores if they have any to get rid 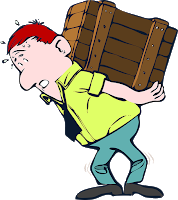 of. Kmart pulled through and gave me all I needed for free.)

On the day of the move, Mr. Handsome’s family brought their van and trailer over, and nine of us transported everything in just a few hours. Although it was evening, it was the hottest day of the year, so we were all sweating buckets, but the feeling of accomplishment at the end was well worth it.

It’s going to be a while before I finish unpacking, organizing, and changing addresses, but I’m trying to enjoy the process. I am especially thrilled because we made it through the move without any major catastrophes!

How many times have you moved in life?