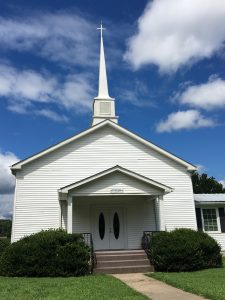 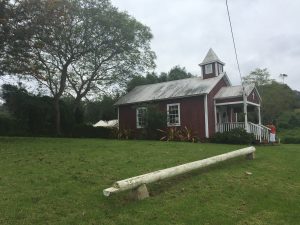 attending service at an old country church. It happened one year ago, while Mr. Handsome and I were on vacation on the Big Island of Hawaii.

It was Sunday, so we decided to go to church. We did a quick online search for Bible-believing, Christian churches and settled on Pu’uanahulu Baptist Church. The bright red church is nestled in the beautiful countryside of Hawaii. For those who are not familiar with the Big Island, the middle part of the island is very much a countryside and is not what most people picture when they think of the tropical beaches of Hawaii. Tourists tend to stick to the resorts along the coast, while the locals live up in the lush hills at the foot of the Mauna Loa and Mauna Kea volcanoes.

The church building is one room and has no electricity or running water. (The bathrooms are located in a outbuilding.) We were nervous about walking into a small room of people we had never met, but the minute we stepped through the door, we felt at home. It was incredibly neat to worship with fellow believers more than 4,000 miles from home. 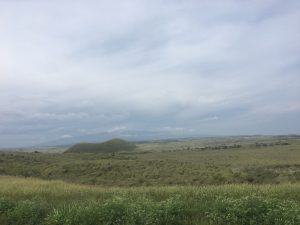 After the service, we were blessed to meet some of the members and shocked to find out that the pastor is a missionary sent from a church that we have attended. He works with a local organization during the week and pastors the church on Sundays. What a small world! We also met some folks at the church who have connections to two places that are near to our hearts. It was an incredible reminder that there are brothers and sisters in Christ scattered throughout the world with whom we share a common bond.

The church was established in 1859, exactly 100 years before Hawaii became a state and 35 years before it became an independent republic. When Pu’uanahulu was founded, Hawaii was still a monarchy under King Kamehameha IV and would remain so until 1893.

The members told us a crazy story: About 100 years ago, the church was located closer to the ocean and was being threatened by an impending lava flow. The parishioners prayed that God would spare the church, but they became frightened and decided to move the small building to higher ground. The lava came as expected, but the property where the church had previously sat remained miraculously untouched. What a neat example of God’s faithfulness!

Have you ever attended an old country church? Do you have any stories to share?