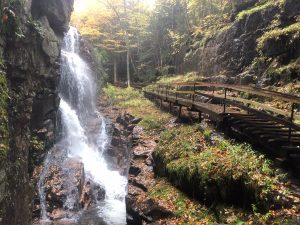 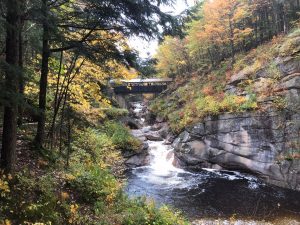 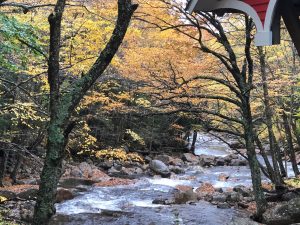 It was pouring rain on the day we drove through New Hampshire, but the fall colors were so gorgeous that we just had to stop somewhere and take in the scenery. Two hours northwest of Boston, we hopped off the interstate and spent 90 minutes at Flume Gorge. 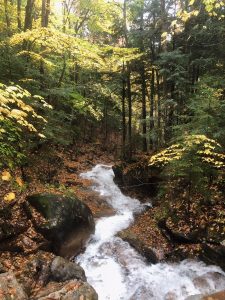 Have any of you been to Flume Gorge? Nestled in the middle of White Mountain National Forest and Franconia Notch State Park, it’s a 2-mile trail that winds along a natural, 800-foot-long gorge. The granite gorge is narrow but deep (up to 90 feet in some places) and has an impressive amount of water running through it. The gorge also features a beautiful overlook to a pool that’s 40 feet deep. 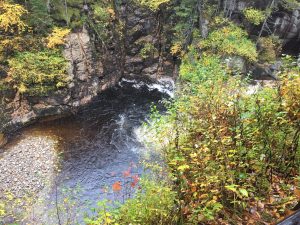 The individual credited for discovering Flume Gorge is Jess Guernsey, who, according to local legend, stumbled upon the natural wonder in 1808. And did I mention that she was 93 years old? Now that’s impressive! 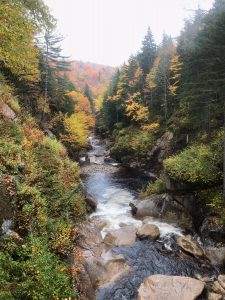 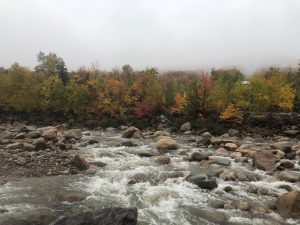 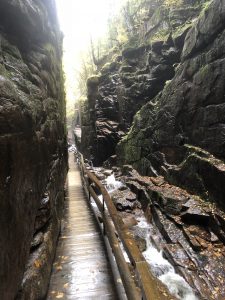 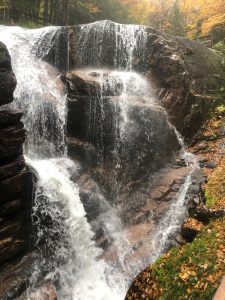 By the late 1800s, the area was a popular tourist destination. A covered bridge built in 1886 allows both foot and vehicle traffic to reach the start of the trail. 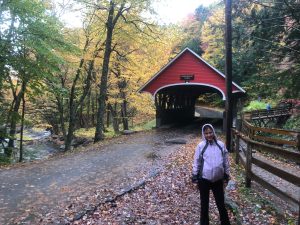 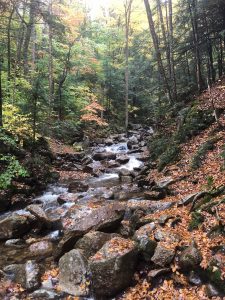 As someone who dislikes rain, walking through the woods on a rainy day was a big accomplishment for me. We were very wet by the end of the excursion, but the views were well worth it. I may or may not have used Mr. Handsome’s sweatshirt to cover my head and face. Okay, I’ll admit that I did. But only because he didn’t want it. It helped..until it, too, was soaked through. 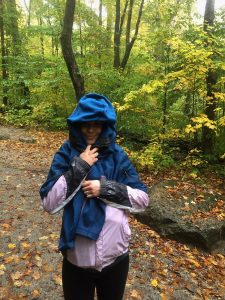 For those who enjoy learning random but fascinating pieces of information, prepare to have your mind blown. Near Flume Gorge is Mt. Washington, which reaches an elevation of 6,288 feet. While that may not sound too impressive, it isn’t the mountain’s height that makes it famous, but what has occurred at its peak.

In the 1870s, a weather observatory station—one of the first in the world—was established on Mt. Washington. And what better place to put a weather station than in a location touted as having the “the world’s worst weather”? In 1934, a 231-mile-per-hour gust of wind set the world record. It was broken in 1996 by a typhoon in Australia, but it is important to note that the current record-breaking gust was recorded at an unmanned weather station, while the observatory on Mt. Washington is manned.

Below is a video that Mr. Handsome and I filmed at Flume Gorge.