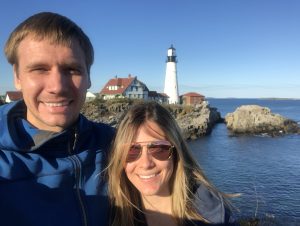 During our October East Coast trip, we toured the Boston area for five days, drove up through New Hampshire to the Canadian border, spent a day in the walled city of Old Quebec, drove back down into Maine, stopped at several lighthouses along the Maine Coast, and flew out of Boston’s Logan International airport. It was a busy trip with lots of stops, but we had a blast. The day we spent doing our Maine lighthouse tour along the coastal road was the most relaxing day of the entire trip. All we had to do was make it to Boston by night, so we were able to enjoy the lighthouses at a leisurely pace. It was chilly (high 40sF/9C) but beautifully sunny. Maine is home to more than 50 active lighthouses, and we visited some of the best. The most beautiful lighthouse, Portland Head Light, is highlighted at the end of this post.

Fort Point Lighthouse, located beside Fort Point State Park in Stockton Springs, is a private residence. If you wish to go onto the property, you must pay a small fee. (There were other lighthouses that we really wanted to see, so we just took a photo from the road and continued on our way.) The current lighthouse has been in service since 1857, but there was another lighthouse in that location for 20 years prior. 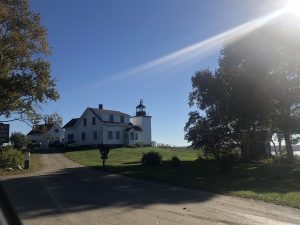 Curtis Lighthouse in Camden, Maine, sits on Curtis Island, which is public land but can only be accessed by boat. The current building has been in use since the late 1800s, but the former structure was lit in 1835. Someday I would love to return and visit the island! 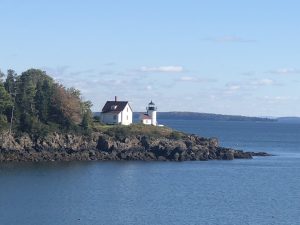 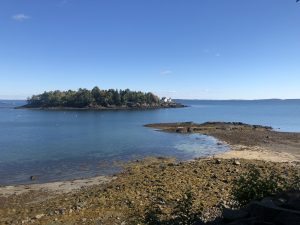 Rockland Breakwater Lighthouse is located in the most interesting location out of all the lighthouses we visited. It sits at the end of what’s called a breakwater, which is essential a narrow, man-made, one-mile walkway that juts out from shore. The breakwater is made of granite blocks and apparently took 18 years to construct. Its purpose is to provide shelter for the harbor. We didn’t walk out to the lighthouse because the wind was blowing fiercely and there were no bathrooms out there (I was six months pregnant at the time). The current lighthouse, which isn’t very impressive compared to the others we saw, was lit in 1902 and replaced a 70-year-old lighthouse that sat on shore. If you double-click to expand this photo, you can get an idea of just how long the breakwater is. 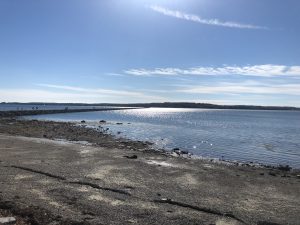 Did any of my American readers collect the state quarters that came out in the early 2000s? The Maine quarter features Pemaquid Point Lighthouse in Bristol, Maine. The current structure was lit in 1857, but the former lighthouse was commissioned by President John Quincy Adams in 1827. Pemaquid has a small fee to enter the park, but we thought it was well worth the money. 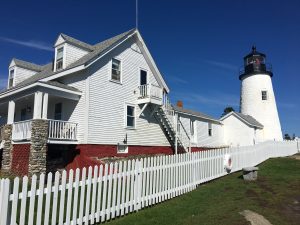 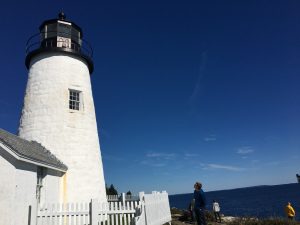 Behind the lighthouse is the Bell House. It was built in 1897 to house the fog bell, used to alert ships during foggy conditions. 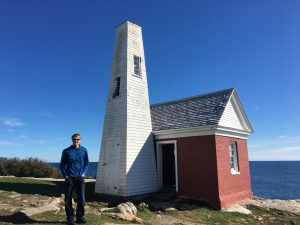 Mr. Handsome was a big fan of this lighthouse because there is a small fisherman’s museum inside part of the lighthouse keeper’s house. He was intrigued by all the old fishing equipment but was especially interested in something very peculiar that was hanging on the wall…the shell of a 28-pound lobster caught in Rhode Island about 60 years ago. It’s estimated to be 75-80 years old! Mr. Handsome really wanted to take my photo with it, so I obliged, even though I was a bit freaked out. 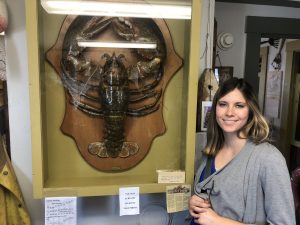 At this lighthouse, we were able to climb up the narrow, winding staircase to the light. The view was great! 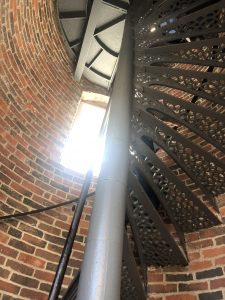 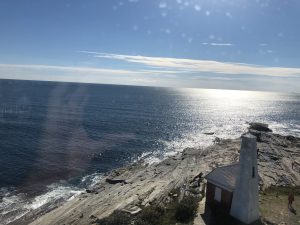 The last lighthouse we visited was Portland Head Light, located in, you guessed it, Portland. 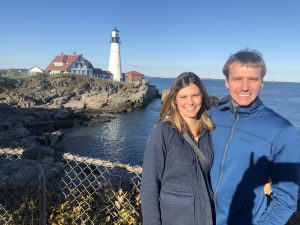 A plaque at the park explains that the lighthouse is Maine’s oldest and was commissioned by President George Washington in 1790. It was controlled by a lighthouse keeper until 1989, when it became automated. Interestingly, it was the first lighthouse built after the United States gained independence from Britain. Portland Head Light was rededicated in 1982 by Vice President George H.W. Bush, in celebration of Greater Portland’s 350th anniversary. 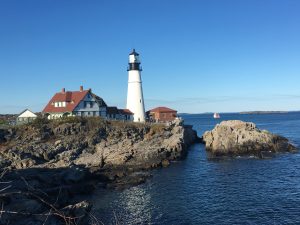 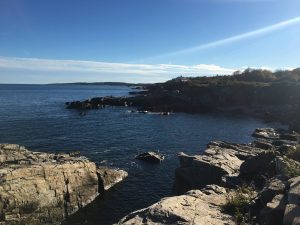 The cliffs around the lighthouse provide a beautiful setting. You’ll notice one of the rocks has an inscription: “Annie C. Maguire Shipwrecked Here Christmas Eve 1886.” On Christmas Eve 1886, lighthouse keeper Joshua Strout, along with his family and their holiday guests, rescued all 18 passengers from a ship (the Annie C. Maguire) that wrecked near the lighthouse. The ship had departed from Buenos Aires, Argentina, and was on its way to Quebec, carrying the captain, his crew, and his family. During the 19th and 20th centuries, Portland Head Light was kept by multiple members of the Strout family. Legend has it that the Strouts’ pet parrot was intelligent enough to warn the keepers of impending storms. 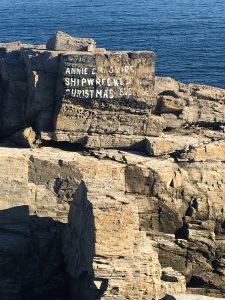