When we moved into our house, one of the bedrooms was already painted blue and gray, which turned out to be perfect when we found out we were expecting a boy. And if our next child is a girl, the colors are still gender-neutral enough that the two kids could share a room for a while. Mr. H Jr will be in our room until about six months of age, but I still wanted to have the nursery ready before he arrived, just to check it off my list.

We don’t have decorations yet. I’m waiting for Mr. Handsome to paint some pictures, either ships or animals, and we might need better lighting at some point, but other than that, the room is ready. 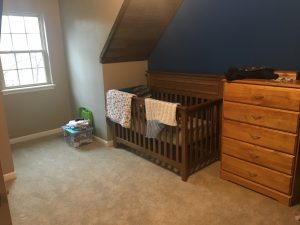 The crib was a gift from Mr. Handsome’s grandparents, and the dresser was mine as a child. The “floating” desk was there when we moved in, and rather than take it out and risk damaging the wall, we decided to use it to store stuffed animals and books. The changing pad is on there for now, but we hardly use it because we have one attached to the Pack ‘n Play that Mr. H Jr sleeps in. It won’t be long before he starts rolling over, and then the changing pad will have to move to the floor for safety. 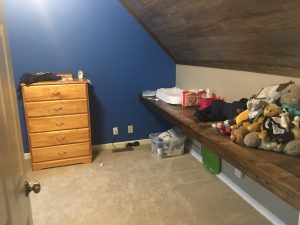 Little Buddy has been blessed with tons of books (gifts from my showers), stuffed animals (some gifts, some from my childhood), and homemade blankets (gifts). I laid him in his crib (for the second time ever) while I snapped these pictures (see top photo), and he fell right asleep. He must like it! The teddy bear in the crib was given to him by Daddy on Valentine’s Day.

(For those who may be concerned, I never let him sleep unattended with blankets or stuffed animals. The blankets will be removed from the crib when he starts using it, and the teddy bear was only there for the photo op.) 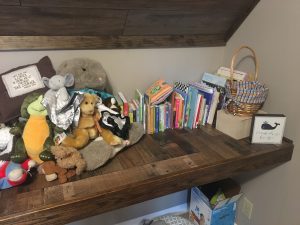