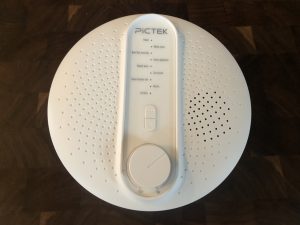 One of our friends, who also has an infant son, is the oldest of 12 children, and her youngest sibling is still a toddler. This friend was visiting her family over the holidays, and her infant started crying inconsolably in the middle of the night. Not wanting to wake up the entire house, she decided to try giving him a bath to calm him down, but as soon as she turned on the water in the tub, the baby instantly stopped crying. Now, whenever their child cries, this couple pulls up a YouTube soundtrack of “rushing water,” and he calms right down.

Mr. H Jr. was a very easy baby for the first couple weeks of his life, but then he became more fussy, so we decided to try the water method. It worked, and we were overjoyed! Rather than waste all my iPhone’s battery life and data, I found a white noise machine on Amazon that has several different sounds, including rain and waves. The brand is Pictek, and it cost under $30. Mr. H Jr prefers the rain sound.

Now I will say that if he is being fussy because his diaper needs changing or he is hungry, the noise machine only buys us a couple minutes of quiet before he starts wailing again, but if he’s crying because he’s tired, it helps calm him and allows him to drift off to sleep. The machine has a 30 and 60-minute timer, so it turns off automatically after the baby is in a deep sleep.

If you’re a parent who has a fussy baby, or if you’re looking for a baby shower gift for a friend or relative, I highly recommend a noise machine. There are a quite a few on the market, but this one has worked well for us. I like that it has a variety of different sounds, rather than just the traditional “white noise” sound. If you’re desperate, you can also try bringing the baby in the bathroom and turning on the bath, shower, or fan. Those methods seem to work for Mr. H Jr, as well.