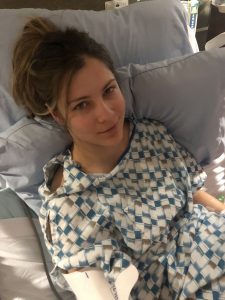 First off, I want to say thank you for all the support, well wishes, and prayers that you all have provided throughout my pregnancy. Being pregnant was a special time, but I’m so glad to have it all behind me and to have my baby in my arms. Waking up the morning after the birth without feeling nauseous and being able to brush my teeth without gagging was an incredible feeling!

Two weeks ahead of my due date, my blood pressure started creeping up. One week before, I spent a few hours in the hospital on monitors before I was released to go home. A couple days later, it was still high, so the nurse midwife scheduled an induction for the following day. She had also performed an ultrasound to make sure that Baby was doing well (which he was, praise God). The bad news was that he was measuring around 9 lbs, give or take about a pound. All the doctors and nurse midwives at the practice were shocked that I was “hiding” such a large child. I can only imagine how big he would have gotten if he had arrived two weeks overdue!

On the day of the induction, I had to fast starting at 3am, so I woke up and made myself a cheese sandwich. I understand that’s a bit of an odd thing to eat at 3am, but it was all that my tired self could come up with. We arrived at the hospital eight hours later, and the midwife started the induction drugs by 12pm. She started slow because I was only dilated 1 cm at that point. For the rest of the afternoon, my contractions slowly became stronger but were not yet painful, so Mr. Handsome’s mom and sister-in-law kept us distracted with games and conversation. The nurses were very kind and popped in frequently to make sure I was comfortable. I was surprised by all the menial tasks that they were eager to do for us, such as refilling our water bottles, fetching snacks, and re-positioning my pillows. They truly were there to serve their patients, rather than just monitor the medical side of things.

During those initial hours, the most difficult part was not being able to eat anything but clear liquids. By the time the baby arrived, I had fasted for 30 hours! I drank all-natural ginger ale to keep my stomach from becoming queasy and consumed who knows home many cups of Jello and bowls of chicken broth. Throughout the day, I felt my brain slowly becoming foggier, likely a combination of the drugs and a lack of food, so my mother-in-law ran to the store and bought saltine crackers. It wasn’t technically “allowed,” due to the risk of having food in the stomach if a C-section became necessary, but Mr. Handsome agreed that a few crackers wouldn’t hurt. And they really did help a lot!

Around 8pm, the midwife announced that it was time to break my water. At that point, Mr. Handsome was in the waiting room eating pizza that his dad and brother had made, but he rushed in to hold my hand.