In celebration of Mother’s Day, we took Little Buddy on his first vacation, down to Santa Rosa Beach, Florida. It required more work than our pre-baby trips, but we really enjoyed watching him experience the ocean for the first time. And I know I would have missed him terribly if we hadn’t taken him along. The Florida Panhandle is a great place for a family vacation.

The drive was just over seven hours. I had kept Little Buddy awake most of the day so he would take a long nap in the car, which he did. He had a two-hour fussy period, but I suppose that is to be expected. Mr. Handsome and I were listening to an audio book, but multiple times we had to pause it to play nursery rhymes to keep the little man happy. 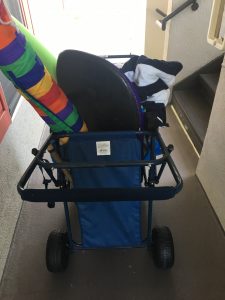 We arrived at our tiny condo late at night. We had only booked it about a month earlier, after our first one fell through. It was a huge blessing from the Lord because it was within walking distance of the beach and was well stocked, and it was significantly cheaper than the other condos we had seen listed online. It even had a beach cart to haul our supplies down to the ocean.

We ventured out to the beach late the next morning. Getting ready for the beach is always a production, so adding a baby on top of it didn’t feel that different. He giggled when I rubbed him down with all-natural baby sunscreen. Then we put him in the stroller and let him watch us gather our beach supplies. Unfortunately, by the time we were actually ready to go, he had reached the end of his happy period.

By the time we arrived at the beach five minutes later, Little Buddy had fallen asleep, so we put a towel over the stroller and set up our beach umbrella. Mr. Handsome and I took turns swimming in the ocean, which was a blast. The water was surprisingly warm, and although someone told us that they had been stung by a jellyfish, we never saw any.

When Little Buddy woke up from his nap, we took the opportunity to take him to the edge of the water. He enjoyed it for a few moments…until a tiny wave came by and splashed a sprinkle of water on his face. But he loved just sitting in the sand under our umbrella, although we had to be vigilant to make sure he didn’t put any in his mouth, which he attempted to do quite a few times.

Just before leaving that afternoon, we tried dipping his feet in the water again, and he wailed. Later that evening, as the sun was setting, we returned to the beach for a walk, and lo and behold, he was the happiest we had ever seen him! Mr. Handsome wore him in the baby carrier, and he cooed the entire time. His favorite tracks on the sound machine that we use to put him to sleep every night are the water sounds, so listening to the waves must have been extremely relaxing for him. He kicked his legs as we walked along.

Our vacation was only three days long, but it was a lovely time. We drove over to Destin and spent a few hours fishing from Okaloosa Island Pier, where we saw dolphins and massive sea turtles. One guy caught a two-foot shark! While it would have made for an interesting story, I was relieved that Mr. Handsome didn’t catch one.