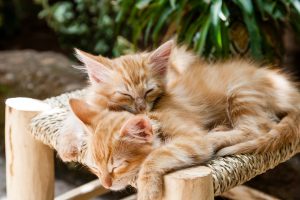 Happy Friday! As Little Buddy approaches his five-month milestone, we want to hear your thoughts on sleep training. Since he was born, our routine has always been to wrap him up in his soft blanket, turn on a TV show, and let him fall asleep all cuddled up to us. (Mr. Handsome is usually the one to put him to sleep, while I get things done or relax.) Then once he is fully out, we swaddle him and put him to bed.

Some nights it’s very smooth and quick, other nights he fusses and fights it. When he was really little, we had to walk him around the living room for what felt like an eternity, and we are grateful that he doesn’t usually require that anymore. Little Buddy sleeps through the night most of the time now (usually wakes up between 5:00 and 7:00am), and to say that we are thrilled is an understatement. When he does wake up in the middle of the night, I am able to wrap him in his blanket and rock him back to sleep. On days when he wakes up early in the morning, he usually wants to go down for a nap almost right away. Our son definitely likes his sleep!

We are constantly being told to “watch out” because our next child is likely going to be a terrible sleeper. We have joked about it, but for now, we are just feeling very grateful.

I will say, though, that what Little Buddy lacks in overnight fussiness, he makes up for in daytime fussiness…

From the time he was a few weeks old (after the “baby honeymoon” phase passed, when he would just sleep all the time), he has been pretty fussy on most days. Not unhappy, but just especially particular about frequent diaper changes, feedings every two hours (that’s the downside of a baby that sleeps through the night–he still wants to eat the same amount in a 24-hour period, so that means feeding ever two hours during the day), and naps whenever he desires them. (Unless we are running errands and he conks out in his car seat, he requires that we hold him while he falls asleep, sometimes through a lot of tears.)

And when you have taken care of all his needs, he fusses because he wants to be entertained.

Sometimes he will lie under his play gym for 10 minute chunks, but when he rolls over onto his stomach and decides he has been there too long, he face-plants and wails until you roll him back over or pick him up. The funny thing is that he totally knows how to roll both ways, but he often chooses not to demonstrate said skills. Every once in a while, he has a really good day and is content for the majority of the time, and on those days, I feel like a million bucks. And while those days seem to be few and far between for our little guy, we still love him to pieces and are grateful to be his parents.

So now back to sleep training. What are your thoughts? I know there are a number of different “methods,” so I’m curious to hear what worked and what didn’t work for you. Our doctor has mentioned doing sleep training at around six months, but I know some parents start sooner or wait until later. Give me all the juicy details of your sleep training marathon!