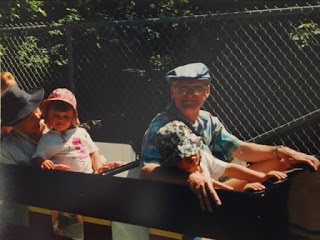 September is coming to an end, and fall is officially upon us. How can that be?

Growing up, I was always wishing time would pass quicker. Whether I was sitting in math class eager for the bell to ring, anxiously watching the clock during karate practice or orchestra because I couldn’t wait to go home, or excitedly counting down the days until our next family vacation, it always seemed like time passed at a snail’s pace.

Now, I blink and another four months has gone by, and it’s time for another haircut, another oil change, another insurance payment. Then I blink again and it’s time to plan yet another Christmas celebration and ring in another new year…I’m left wondering how on Earth it has been nearly two decades. (Turns out that all the worry and concern that something terrible would happen the second the 2000s began was for naught.)

My grandfather passed away a short while ago, and while he lived a long life and we are rejoicing that he is with the Lord and no longer in pain, it has been a reminder of how quickly the years go by.

Many of you have asked for an update on the book I am writing about my grandmother’s WWII story. The book is nowhere near finished, but I am determined to complete the project. She and my grandfather were a good match, as they both grew up in Europe and went through major trauma as a result of the war. My grandfather was only a child when he lost his home and his parents to an air strike and he was forced to start over on his own.

Despite their many hardships, my grandparents made a new life in a new country, clinging to their faith and choosing to rejoice at the little things, even while dealing with the sorrow that came from losing multiple loved ones to the war and being forcibly separated from others for as long as 30 years.

I’m curious to hear what lessons you have learned by looking back at the lives of those who have gone before you, whether relatives, close friends, or historical figures?