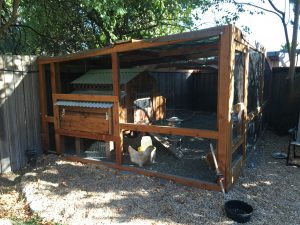 While in San Francisco, we had dinner with Mr. Handsome’s distant cousin over the bridge in Sausalito. She lived in a very suburban area and had a small backyard, but she had chickens. She traveled a fair amount for work and had coyotes in her area, so she installed a coop that would keep the chickens safe while she was gone….