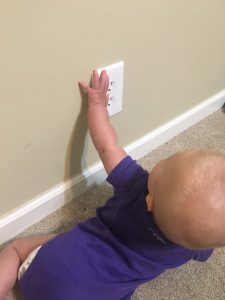 It’s time to baby-proof! Little Buddy is five-and-a-half months old, and he is on the verge of being mobile. He still can’t quite crawl, but he can wiggle his arms and legs enough to spin around and even move forward a little bit. He is also strong enough to reach for something with one arm while still holding his head up with the other.

This week, I learned that he is drawn to cords and outlets like a magnet. You can see the excitement in his eyes when he spies one and tries to go for it, and he has already succeeded in pulling a big cord out of the wall. It’s really quite amazing how strong his arms are and how strong his drive to yank cords is.

Our house is now equipped with little plastic outlet covers, and I ordered a few plastic boxes that fix to the outlet and allow cords to be plugged in but prevent babies from pulling them out or accessing the outlet.

I spent a few hours scouring the internet for baby-proofing ideas and searching for supplies, but I was shocked (no pun intended) to find out that there is very little useful information available, and there are only a few options when it comes to baby-proofing paraphernalia. This is the 21st century. We have self-driving cars and watches with internet access, but we can’t design a few more gadgets to protect babies from electric shock. There’s something wrong with our world.

A while ago, I purchased a sliding outlet cover to try. You slide it open to plug something in, and then when the cord is pulled it, it automatically slides closed. There are several companies that make them, and I chose the one with the best reviews. We’re talking over a thousand really good reviews. But when I read a few reviews on another company’s sliding outlet covers that mentioned the phrase “fire hazard,” that was enough for me to question the safety of the entire concept. The concern is that the sliding mechanism might make the prongs come loose from the plug (but not fall out completely) and cause the plastic on the outlet cover to melt. In a very rare case, it could result in a fire. So there goes that idea.

I am familiar with the tamper resistant outlets that are required in all new houses, and we are considering installing them in our home. But I’m still not sure that I trust them enough to install them and do nothing else to baby-proof our outlets And of course, that still wouldn’t solve the problem of Little Buddy pulling cords out of the wall and chewing on them.

If any of you seasoned parents have baby-proofing tips (both electrical and non-electrical) to share, go ahead and leave them here. I know that other readers would appreciate them, as well.