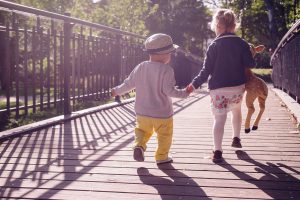 Last weekend, Mr. Handsome’s mom and four sisters came to visit. Two of the girls are in high school and college, and two of them are married with kids. It was pretty chaotic to have five little kids in our house at once, but we had a lot of fun. I’m really thankful to have found some great deals on toys for older kids earlier this summer. Mr Handsome rolled his eyes when I brought them home, but they sure did come in handy!

I really enjoyed watching Little Buddy interact with the two other babies. My infant nephew is three months older, and my infant niece is five months older. The two of them are more mobile, but he has surpassed both of them in size.

I also loved seeing my almost 5-year-old niece and almost 3-year-old nephew play with Little Buddy. My nephew just adored him. One evening at dusk, he jumped off a step on our porch about 50 times in a row, and every single time Little Buddy let out a big belly laugh.

My niece, who just had her fifth birthday party but hasn’t yet had her actual birthday, is probably the smartest little kid I have ever met. She is very advanced in school (my sister-in-law homeschools her) and is well spoken. Early one morning, I woke up to find her in the living room singing a perfect rendition of “Rockin Robin.”

I told her how well she was doing, and she replied, “Well I can’t sing it as high as Michael Jackson.”

“How do you know about Michael Jackson?” I asked, laughing.

“He’s the one who sings the song,” she replied, matter-of-factly.

I was also reminded of the refreshing honesty of young children when she pushed her younger brother over while they were reading a book. (She is very well behaved most of the time, but no one is a perfect angel.)

“Why did you push him?” my sister-in-law questioned.

“He was in the way of the book!” She responded.  I turned away so she wouldn’t see me laugh. Oh the innocence of littles!

Do you have any stories to share about the children in your life?