About a month before we got married, Mr. Handsome cleaned out the house he had been renting during dental school and brought everything back to his family’s house so the two of us could decide what to keep.He had some great second-hand furniture that he had received as gifts, including a couch and a kitchen table. He also had a large bookshelf. The minute that bookshelf made it inside, Mr. Handsome’s 12-year-old sister, who is a major bookworm, was all over it. “Can I have it? Can I have it?” she asked eagerly.

Unable to resist her cuteness, I gave in. I also figured it would be a long time before we had enough books to fill such a big shelf. Well, I was wrong.

Several days after we had moved into our rental house in Tennessee, I realized that we needed a bookshelf. As newlyweds on a tight budget, we decided it would be financially irresponsible to just go out and buy a bookshelf.

What was I supposed to do? I walked through our house, looking for any sort of shelf that would work. At one point, I even tried balancing our books on a windowsill, but that didn’t work very well.

I came across a plastic milk crate that fit half our books. Then I noticed a pile of empty moving boxes and thought, ‘Why not just turn one of those into a bookshelf?’ I pulled back the flaps, filled it with books, and voila! A makeshift bookshelf! It’s not the prettiest think ever, but it meets our needs.What do you think? 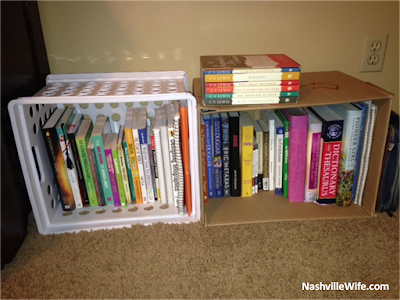