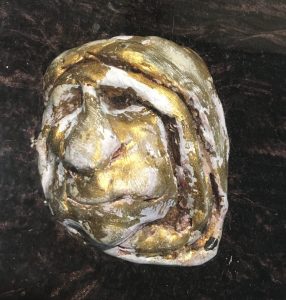 This morning, Mr. Handsome and I, along with Little Buddy (who was in a great mood and loved being out and about), went on a date in the 12 South area of Nashville. We took a walk through the nearby residential neighborhood to get a bit of exercise. Then we picked up two 100-layer donuts from Five Daughters Bakery (Mr. Handsome’s favorite treat–regular donuts just don’t compare) and iced coffee from Bongo Java.

While in line at Bongo Java, we saw a display case containing a cinnamon bun and were immediately curious. We were shocked to learn that this cinnamon bun (which was actually a replica of the real thing) is world-famous.

In 1996, an employee took a second look at a Bongo Java cinnamon bun and realized that it bore a striking resemblance to Mother Teresa. An article in Nashville’s newspaper, The Tennessean, went viral, and the bun was featured in publications across the world and received air time on multiple radio and TV programs. Visitors flocked into the coffee shop to see the bun in a display case where it had been preserved.

It wasn’t long before the owner of Bongo Java was contacted via phone by Mother Teresa’s attorney, and then in a letter from Mother Teresa herself, asking him not to use her likeness to sell merchandise. “I have always refused permission for the use of my likeness for commercial ventures,” she wrote in her letter. As one would expect of Mother Teresa, she was very kind in her request. “I do know that you have not done anything out of ill-will, and so trust that you will understand and respect my wish,” she continued.

It was decided that Bongo Java would call it the NunBun instead of the Immaculate Confection or the Mother Teresa Miracle Bun. The shop also negotiated a limit on the amount of NunBun merchandise it could sell. But despite her request, it sounds as if Mother Teresa was not upset about the bun but rather got a kick out of it. Apparently she joked about it shortly before her death in 1997, mentioning in the presence of her attorney and successor that they should have the people in Tennessee fun a bun that looks like her successor.

In 1997, a thief broke into the coffee shop and stole only the NunBun. It has not been recovered, but if it ever is, the person who finds it will receive a $5,000 reward. The photo above is of the replica that is displayed at Bongo Java.