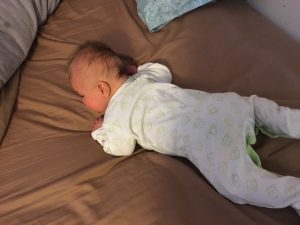 Just after he hit his three-month milestone, our Little Buddy made a very exciting accomplishment. He rolled over from his back to his stomach! He has always enjoyed lying on his back and kicking at the toys hanging from his activity gym. He showed no interest in rolling over, until one day he randomly started trying. He would hoist himself up on his side and then fall back down. After a day of attempting (he is a very persistent little boy, like his daddy) he finally made it happen.

Mr. Handsome wasn’t home when Little Buddy flipped for the first time, but when he returned home, we put him on the carpet on his back so he could show Daddy his new trick. We were cheering him on like he was an Olympic athlete. (Life sure changes when you’re a parent–who would have thought that rolling over would be so exciting?) It took him another day to figure out how to pull his arms up and prop himself up. At one point, he rolled from his front to back, but he has only done that once.

Now, when we put him down, all he wants to do is flip. A few days ago, he rolled several times in a row, but he usually just flips to his stomach and then gets upset and starts crying.

The downside of having a roller on our hands is that I can no longer place him on the couch or in the middle of our bed while I run and grab something. Our living room is hardwood, so I’ll need to purchase a rug or mat of some kind so he has a safe place to play. And it’s time to buy a baby gate for the top of our stairs!