It’s been an eventful week for us! Over the weekend, we took a day trip to Cummins Falls State Park in Cookeville, Tennessee. It’s a small state park in the hills of Middle Tennessee, and it’s definitely a gem.You walk about a mile (both on land and through shallow water) and then arrive at a beautiful waterfall that allows swimming. The park is staffed by rangers who enforce a set of rules (no alcohol, etc) in order to ensure a family-friendly atmosphere.

It was 95 degrees on the day of our visit, so the trail and waterfall were both very crowded, but we had a blast.

Here’s the view from the lookout point. Before it reaches the water, the trail becomes pretty steep in spots, as you have to walk down the side of a cliff. But we passed guests of all ages, so it is certainly doable for families with young children. 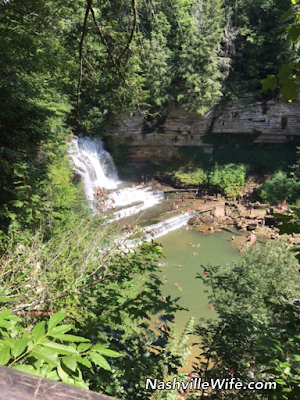 A few days after our waterfall excursion, Mr. Handsome and I were sitting in the living room, relaxing after a delicious dinner of deep dish pizza. He was talking to his dad on the phone, and I was folding laundry.

I looked up and noticed a creepy looking spider by the front door. It wasn’t huge, but it looked odd to me. I grabbed a piece of paper towel and ran over to squish it, quickly realizing that it was not your average house spider. “I think I just killed a brown recluse spider!” I shrieked.

Mr. Handsome, still on the phone, told me that it was probably nothing to worry about, but he quickly finished up his conversation and came over. After conducting some research online, he turned to me and said, “You know what? You’re right. It’s a brown recluse.”

I just about had a panic attack. A poisonous spider? In our house? This had to be a bad dream. We contacted our landlord, and she made an appointment with an exterminator. Have you ever found poisonous spiders in your house?