Earlier this month, my brother and his wife came to visit us in Nashville. (Remember the photos I posted of their Oregon Cost wedding last fall?)Neither of them had ever been here, so we had fun showing them the area. On the first night, we walked around downtown and treated ourselves to malts at Mike’s Ice Cream. My brother-in-law was able to get us access to one of the skyscrapers, so we gave them a birds-eye view of the city from a balcony.

My brother and his wife are more outdoorsy folks, as are we, so the rest of the weekend was spent hiking and exploring various state parks. Our first stop was Burgess Falls State Park in Sparta, Tennessee, which we visited a couple years ago. We hiked about half a mile and then came to this lookout point.

A short while later, we found the main waterfall. If you look closely, you’ll see a few people standing on the rocks at the base. It’s a long way down! 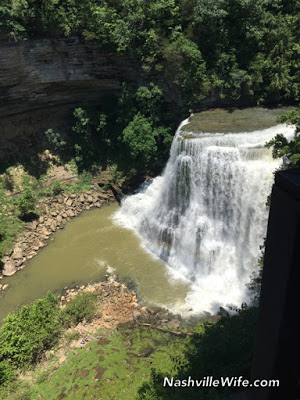 We were able to hike down a short trail to the top of the falls. (I almost passed out when Mr. Handsome approached the edge and got down on his belly to look over, but it made for a good photo-op.)

There were a number of other people there, all trying to figure out how the few individuals had made it down to the base. There are stairs, but they have been closed since the last time we were here, due to damage by extreme flooding. We never did figure it out… 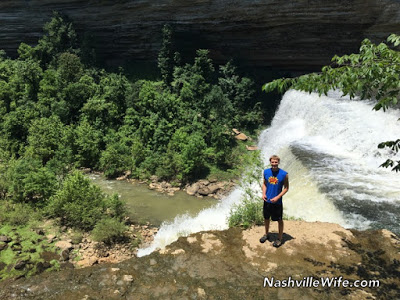 Our last stop was Cummins Falls State Park in Cookeville, one of my favorite places in Middle Tennessee. We have visited several times since we moved to the area. (Remember my Waterfalls and Exterminators post from last summer?)

The first time we came, there were very few people at the falls, but word has gotten out, and now it’s always crowded. (It’s a very unique attraction, so I’m not surprised why it has become so popular.) The best way to describe it is a free, natural water park, and although the hike down to the falls is steep, folks of all ages make the trek because it’s such a neat place. Someday soon, I would love for Mr. Handsome to make a painting of the falls! 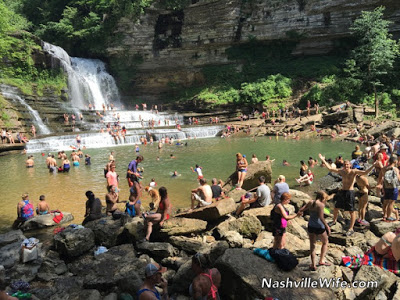