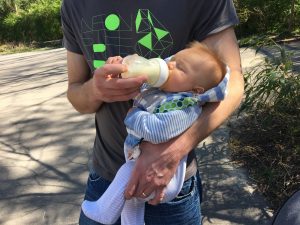 baby is how much work it takes to breastfeed. Before I became a mother, I got the impression that it was a fairly simple process that didn’t take much time or thought. Sure, it was common for ladies to have challenges at the beginning, but those issues didn’t last past the first several weeks, right? Wrong. Now that I have experienced it for myself, I am realizing that my perception of breastfeeding could not have been more wrong.

According to the CDC, approximately 83% of children are breastfed as newborns, but when babies reach three months old, that statistic drops to just under 50%. By one year of age, only 35% of babies are breastfed.

All I can say in response to those numbers is this: I get it. Breastfeeding is hard. Even for those who have a fairly smooth experience, it still takes a ton of time and energy. Even in the moments when you aren’t physically nursing, it still has to be on your mind. Is what you are putting into your mouth safe for your child? Are you getting enough vitamins and nutrients? Are you drinking enough water?

For me, one of the most difficult aspects of breastfeeding has been simply getting enough food. Gone are the days when I can eat lunch and not have to think about food until dinnertime. If I leave the house for more than an hour without a bottle of water and a sack of healthy snacks, my milk supply takes a direct hit…as does my ability to stay energized and alert.

Little Buddy has struggled with breastfeeding from day one. Our hospital provided wonderful lactation consultants free of charge when we delivered, and they still do, which is amazing. I could bore you with the details, but they have basically determined that he has a mind of his own. Sometimes he breastfeeds, and other times he doesn’t. It took many hours of tears (both his and mine) to figure out out, but we have finally settled into a good routine that includes a combination of nursing and pumping/bottle feeding.

And while it took a while to accept the fact that my baby wasn’t ever going to “nurse like a pro,” I have come to really enjoy the flexibility that comes with being able to pump. It lets me take advantage of my increased supply in the morning hours without feeling the burden of a lower supply in the evening. It allows us to “fill him up” before bed so he is able to sleep through the night. When we’re at Bible study, either of us can feed him while we both still participate in the conversation. Pumping on the go was a challenge at first, but it didn’t take long to get the hang of it.

I still nurse whenever Little Buddy will tolerate it (which is always at least once a day) because there are studies that say that the actual act of breastfeeding allows a woman’s body to interact with the baby’s saliva and thus create “customized” milk based on her baby’s needs. I also have a container of organic formula on hand for emergencies. We have used it a number of times, and it gives me comfort to know that we have three ways to feed Little Buddy.

Our baby is only five months old but is bigger than plenty of babies who are seven and eight months old, we have recently started to slowly introduce pureed baby food (and when I say slowly, I mean a few times a week), just to get him used to it. I plan to breastfeed until his first birthday.

Do you have any experience with breastfeeding? I would love to hear from you!