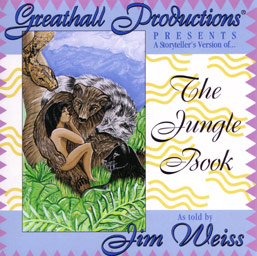 We recently had the pleasure of meeting world renowned storyteller Jim Weiss and his wife, Randy, at my brother-in-law’s December wedding. (They are dear friends of the bride’s family.)

Mr. Handsome and his siblings grew up listening to audio recordings of Jim’s stories, as did thousands of other children. He and I had a wonderful time chatting with Jim and Randy and hearing how they broke into the world of storytelling. They were very encouraging to us as we told them about our budding careers.

During the wedding reception, Jim read a poem for the bride and groom. It was a beautiful reading, but Mr. Handsome and I nearly burst out laughing as we watched the facial expressions of Mr. Handsome’s other brother, who suddenly recognized Jim by his voice. Somehow he had missed the memo that Jim and Randy would be at the wedding, so you can imagine how shocked he was when he realized that this “random” friend of the family was the same person he had been listening to since childhood! It was truly a Kodak moment.

Jim and Randy generously offered to send us some of Jim’s recordings. When I mentioned the idea of doing giveaway on my blog, they were thrilled. Since the inception of Greathall Productions in 1989, Jim has
recorded more than 60 audio recordings of beloved stories under that label,
including The Jungle Book, A Christmas Carol, Arabian Nights, The Adventures of Tom Sawyer, A Tale of Two Cities, and multiple titles by G.A. Henty.

Jim has also created recordings of fiction and non-fiction works for other publishers, including the well-known series The Story of the World
by Susan Wise Bauer. In addition to producing audio recordings, Jim has spent time
traveling as a storyteller and workshop instructor. He has received more
than 100 awards for his work.

I have two wonderful Jim Weiss giveaways in store for you. The first is The Jungle Book. Follow the prompts on the Rafflecopter widget blow to enter to win one of four copies.

Jim Weiss’ recordings can be ordered off Amazon.com and WellTrainedMind.com. He and Randy publish a bimonthly e-magazine, which can be accessed on their website, jimweiss.com, by clicking “View Archives of Past E-Magazine Blogs.”