A few weeks ago, my mother-in-law and father-in-law were visiting Nashville for the weekend, so rather than go to our church, we all decided to go to church with Mr. Handsome’s brother and his wife. 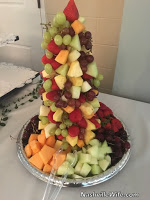 After the service, we chatted with a young woman and her mother. My mother-in-law and the young woman’s mother really hit it off, and it wasn’t long before they were talking like they were lifelong friends. (We were all a bit confused at first, but when we found out that they both have seven children and are/were homeschool moms, we understood their instant bond.) 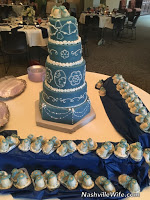 It just so happened that this young woman was getting married in Nashville the following weekend, and her mother was stressed out because she is from the East Coast and was having trouble finding people to help out at the DIY event.

My mother-in-law non-nonchalantly said that she would see if any of her children would be able to lend a hand, and the woman was ecstatic. “That would be wonderful!” she exclaimed. 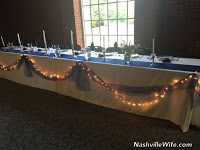 My well-meaning mother-in-law called over my brother-in-law and his wife (the ones who actually attend the church and would probably know many of the guests at the wedding) to see if they were free the following weekend. They were busy, so Mr. Handsome and I volunteered to help.

The following weekend, we arrived at the church, and the mother of the bride was being pulled in 1,000 different directions, so she asked another helper to take us to the kitchen and show us what to do. Well, this person took us to the kitchen and then admitted that she had no idea what we were supposed to do, so she handed us a list and left. 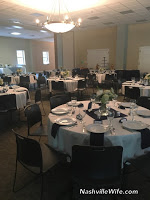 To make a long story short, we did a lot of improvising, as we set up the appetizers and dinner buffet, met the baker and showed her where to put the cake, and (after the ceremony was over) instructed the guests where to line up for dinner.

We had a bit of difficulty figuring out the drink situation. The labels on the two dispensers said Sweet Tea and Strawberry Lemonade, but the huge walk-in fridge only contained Kiwi Lemonade (didn’t even know that was a thing) and Unsweetened Tea.

If you live in the South, you know that serving only Unsweetened Tea is simply not socially acceptable. We changed the labels and filled the drink dispensers, hoping that the well-meaning hosts, who were from the North, wouldn’t be chewed out by all the sweet tea loving guests from the South. 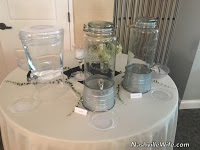 The mother and father of the bride were very appreciative of our help and even gave us a gift card to Olive Garden. When we had finished our duties, we sat down to eat the fabulous food, which was from an Indian restaurant. 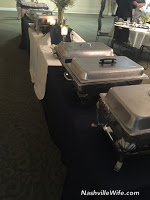 The highlight of the evening, which turned out to be a lot of fun, was listening to one of the guests tell us the bride and groom’s love story. It turns out that the groom is completely blind, but he is a successful lawyer in Washington D.C. and can do everything but drive a car. (Isn’t that incredible?)

Rather than coddle him, his parents had pushed him towards greatness by refusing to allow him to make excuses for himself. The guest, a college friend of the groom, told us a story of a time when one of the groom’s bed sheets had ripped while he was away at school. The friend suggested the groom call his mom, who had purchased the sheets, and ask her to order a replacement. The groom laughed and told his roommate that he knew exactly what his mom’s response would be: “Just take a taxi to Kohl’s and buy yourself a new set.”

If you live along the U.S. Eastern Seaboard, you’re in for some serious winter weather. More than 30 million people, including the entire populations of Washington D.C., Boston, and New York City, are bracing themselves for blizzard conditions, with the nation’s capital expecting up to two-and-a-half feet of snow.

Here in Tennessee, we’re experiencing the early stages of the massive winter storm “Jonas” that is headed for the East Coast. For us, the snow will taper off this evening, with 3-6 inches of accumulation forecasted.

This is normal winter weather in the Midwest (where Mr. Handsome and I are from), so we were puzzled to hear that every single one of my husband’s dental patients had canceled their appointments for today and tomorrow.

Just another positive of Southern living…more snow days! Our relatives back in the Midwest are going to be jealous.

Here’s something to make you laugh: 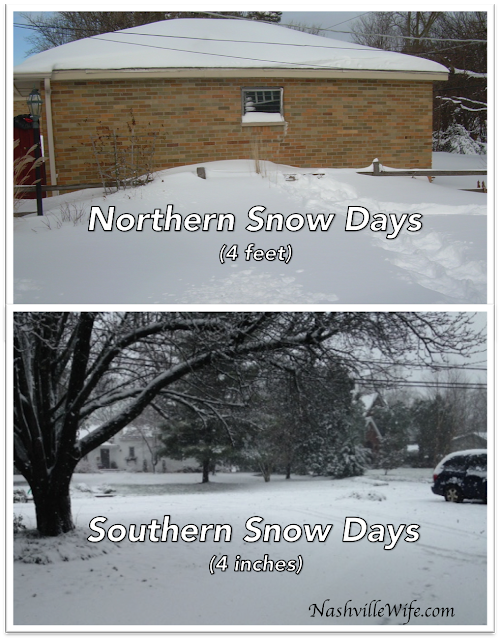 *The top picture is one I took in my family’s backyard several years ago, and the bottom snapshot shows what it looks like outside our front door this morning.