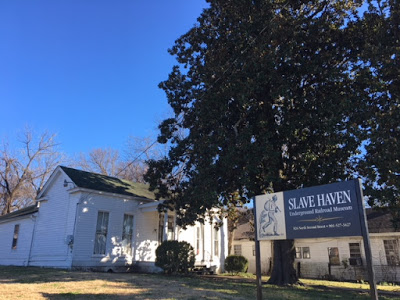 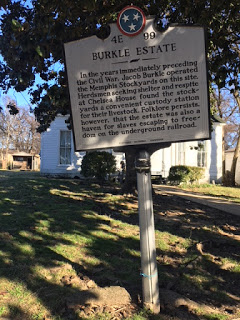 You may remember our trip to Memphis last spring. I shared photos of the Lorraine Motel, iconic glass pyramid, Peabody Duck March, and Memphis Zoo. We returned again this year for a conference, but this time we were only in town for a short 36 hours, rather than a full weekend. While Mr. Handsome attended the conference, I toured the city, as I did last year.

The house, known as the Burkle Estate, was built in 1856 for German immigrant Jacob Burkle and his family. As a devout Christian, Jacob Burkle was very much against slavery, so after his home was completed, he decided to use his cellar to house enslaved Africans seeking freedom in Illinois via the Mississippi River.

Located only a few blocks away from the river, the Burkle Estate likely housed a large number of slaves, historians believe. To allow his home to be easily recognized by these guests and as a signal that his home was a safe place for them to stop, Burkle planted magnolia trees in his front yard. Magnolias are not native to the area, making these the oldest magnolias in Memphis. 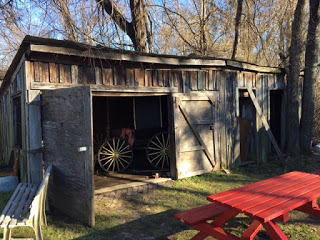 Harboring fugitive slaves was a serious crime, so Burkle kept no written records of his actions, and he did everything he could to appear to the public as a “respectable gentleman.” Because he owned a Memphis stockyard, he was wealthy and was expected to own slaves. For that reason, Burkle purchased two slaves–a male and female. He treated them like family and then secretly helped them gain their freedom in Canada. To make it look like they had escaped, he ran a newspaper ad offering a reward for their return.

Members of the Burkle family lived in the home for more than 100 years. Photography was prohibited inside the house, but the cellar where the slaves hid was accessible through small hole in the base of the house. 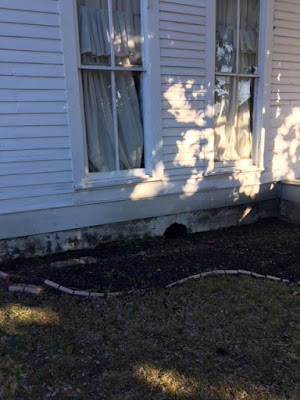