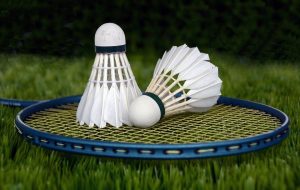 Do you (or did you) play sports? For Mr. Handsome and me, exercise and athletics have always been a big part of our lives. We both grew up playing tennis, although I was more serious about it and made the high school tennis team during my freshman year. The competition was steep, as we had numerous players with state and national rankings, so I didn’t make the team during my sophomore year. For Mr. Handsome, tennis has always been more of a casual sport, but he can still beat me, despite all the lessons I took.

I also played competitive badminton during high school and went further with that than with tennis. Early on in our relationship, I challenged Mr. Handsome to a match. He laughed, picturing a leisurely game of backyard badminton. Let’s just say that it was a bit more fast-paced than he had expected. I’m not one who usually enjoys showing people up, but I would be lying if I said I didn’t get just a tiny bit of satisfaction out of returning his hits with point-ending smashes.

Starting in elementary school, I took karate for five years and was just one stripe shy of my purple belt belt before I had to quite in high school because the classes were taking up too much study time. I also did a lot of downhill skiing, starting at age five.

Now let’s talk about Mr. Handsome. He is way more athletic than I will ever be, which fits because he’s a very manly guy overall. Growing up, he played a handful of sports, including baseball, basketball, and soccer. Then as he entered his teenage years, he decided to focus on basketball and did extremely well on the high school team. (He played one year of football, but that dangerous sport was short-lived, thankfully.) He has also done a decent amount of water sports and is great at wakeboarding.

Both of us make it a point to exercise at least a few times each week, and Mr. Handsome plays basketball when he can. When we get together with his family, it’s really sweet to watch him and his dad and brothers compete. I am convinced that Mr. H is the best player, but I suppose I could be biased.

As far as watching sports, I’m not a huge fan. Mr. Handsome watches some sports on TV, but he would rather be playing the sport or watching live.

Tell me about the sports you enjoy playing and/or watching. 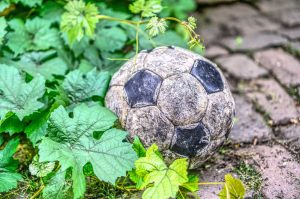 If you grew up watching The Brady Bunch, you’re probably familiar with this iconic quote by Bobby Brady. Recently while visiting with some friends, we were introduced to two games that both involve playing ball in the house: living room floor hockey and living room baseball….