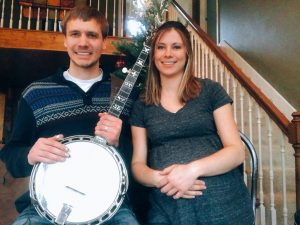 Mr. Handsome has been practicing his banjo! He came up with his own arrangement of the popular Christmas carol “O Come O Come Emmanuel,” for the sole purpose of sharing it with my blog readers. Our video is below. 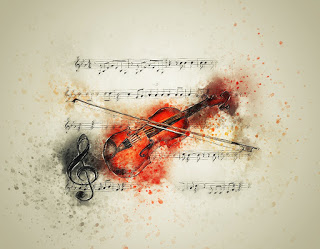 A while ago, one of my readers asked if I play any instruments. As many of you know, Mr. Handsome is very musical. I have shared videos of him playing guitar and banjo (his main instruments) as well as violin. He never ceases to amaze me with his musical ability, and I love listening to him. (Below is a video of Mr. Handsome playing “Amazing Grace” on a 300-year-old violin.)

Over Christmas, we were visiting someone who had a piano. Mr. Handsome took classical piano as a child, but it had been at least eight or ten years since he had played a single note. Well, he sat down and performed, from memory, a beautiful rendition of “Jesus Paid It All.” He isn’t great at reading music, but he has an excellent ear.

Now as far as my musical ability goes, I grew up taking violin lessons. I started in fourth grade and continued into my first year of high school, but when my family ran into financial struggles, I decided that the strain I would be placing on my parents by continuing music lessons was not worth it. I continued to pick up my instrument from time to time and play for fun. One of my college roommates was also a violinist (as were several of the three dozen girls I lived with), and the two of us enjoyed playing duets during our study breaks.

When Mr. Handsome and I got married, I attempted to learn the mandolin, which has the same strings as the violin. It’s a fun instrument, but I quickly realized that there were just too many other things vying for my attention to justify investing the amount of time necessary to learn a new instrument.

As a side note, I also took singing lessons for a year during college

Do you play an instrument? Or perhaps you’re a singer?