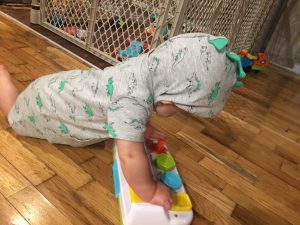 Our Little Buddy is almost eight months old, and we are getting so much joy out of watching him reach new milestones. It’s funny because he much prefers playing with toys on his stomach over playing in a seated position, and although he can get up on his hands and knees and even all fours, he prefers to army crawl. (He can move very quickly!)

Little Buddy still has a peculiar fascination with electrical cords, which we don’t allow him to touch, of course. But when we plug one in for even just a second, he can spy it from across the room and makes a beeline. Recently, our little mover has started grabbing onto chairs and other objects and using them to pull himself up to his knees and even into a standing position. And when he does, he’s so proud of himself! The challenge that comes along with that is that he is by no means stable yet, so we have to watch him very closely.

His most recent accomplishment was climbing an entire staircase, which he did yesterday for the first time. I had my hand on his back because he isn’t stable enough to do it by himself, but he did all the climbing. I was stunned.

On another note, his fussiness is slowly improving–emphasis on the slowly. We think he used to fuss because he wanted to be on the move and hadn’t learned to crawl. Now. we think he fusses because he wants to walk but can’t without assistance. Oh how difficult it is to be a baby! We were laughing last weekend because we had some friends in town and had four adults and three children staying with us. Our son was the youngest and the only one not walking, but he sure pulled his own weight.

If one of the kids was playing with a toy that he wanted, he would crawl right up to them or rush over in his walker, pull the toy out of their hand, and then be on his merry way. It was really hard not to laugh because I had never seen such a young baby do that, but we tried to hide our chuckles. And although he doesn’t have any concept of sharing at such a young age, we would gently return the toy to the other child and find something else for Little Buddy to play with. And sometimes that prompted quite the dramatic response from Little Buddy! It sure is rough to learn that you can’t always have your way, but it’s an essential life skill.

We have been doing a ton of baby proofing, and I plan to write an extensive post with photos because there are very few baby proofing guides out there. I’m signing off now, as it is 9:30pm, and I need a few minutes of relaxation before bed. Hope you enjoyed the update.