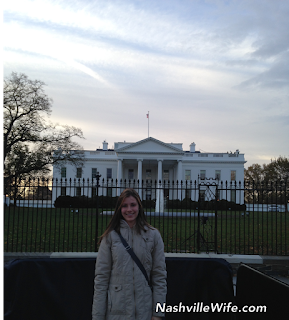 I have a story to share with you all. Did I ever tell you about how I almost worked for the FBI?

Two years ago, when I was close to finishing school, I went to a job fair and handed a few dozen resumes out. One of the organizations that was there was the FBI. That’s right the Federal Bureau of Investigation. “How neat!” I thought.

As you can imagine, that booth was one of the most highly trafficked at the job fair. I submitted my resume, as did thousands of other students from my school and schools across the country.

Not expecting to hear back, I was shocked when I received a call requesting that I schedule a phone interview with one of the hiring managers. The phone interview went well, and three weeks later, I was on my way to Washington DC for an interview at FBI Headquarters.

I arrived late in the evening for an interview the following day. Never having been to DC, I woke up at the crack of dawn and visited all the major monuments. I took a picture in front of the White House, walked past the Washington Monument, toured the Library of Congress, and peaked inside the Smithsonian National Museum of Natural History … all before lunchtime.

By the time I arrived at the J Edgar Hoover building, which houses FBI headquarters, for my interview, I was exhausted but incredibly excited.

You can probably guess that security was tight. Imagine airport security times 10. Myself and a few other interviewees received a tour of an exhibit that features memorabilia from some of the most notorious crimes committed against the United States. My tour guide, a rookie employee, explained the process of becoming a special agent. Although it required extensive training, it was an attainable goal.

The actual interview went very well, but again, I was not expecting much. Surely there were plenty of people more qualified than me. Well, you can imagine my surprise when I received a job offer several weeks later. The letter included information about the exhaustive background checks and in-person meetings that were required prior to becoming an official employee.

This was not a job offer that I could just pass up on a whim. At that point, Mr. Handsome and I were not engaged, but we had been in a relationship for 20 months. After hours of prayer and thought, I decided to decline the offer.

Between the day of my second interview and the day I received my job offer, I had received an offer to work in the communications department of a ministry. I ended up accepting that position, and within a few weeks of working there, I knew I had made the right choice. Mr. Handsome proposed four months later.

Sometimes I wonder what my life would have been like if I had accepted the job with the FBI and moved to Washington DC. Where would I be 10 years from now if I had chosen to focus on my career and climb the corporate ladder to eventually become a special agent? I guess I’ll never know, but one thing I do know is that God has me right where he wants me, and that’s enough.