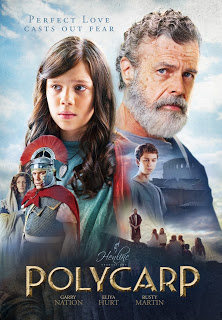 Last year, I had the privilege of pre-screening Polycarp, a fabulous movie with a conservative Christian focus. My readers have asked me to share my favorite family-friendly films, so I have decided to post my review:

Produced by Scott Eash, the movie Polycarp is a historical drama that tells the gripping tale of Christians facing persecution in second-century Smyrna. Anna (Eliya Hurt) is a 12-year-old slave who receives her freedom when she is adopted into a devout Christian family. She befriends Polycarp (Garry Nation), the elderly leader of the Smyrnian church who is passionate about preaching the Gospel.

When the Roman proconsul proclaims that the citizens of Smyrna must worship Caesar or be sentenced to death, Polycarp and the other Christians display an unwavering faith as they refuse to denounce the one true God.

Polycarp tells the members of the church: “But understand this: We will not be constrained by what [the proconsul] says or does. Our only constraint is the love of Christ.”

Anna’s freedom from slavery is an illustration of the freedom from sin that God has offered to Christians through the death and resurrection of Jesus Christ. In the face of persecution, Anna must decide if she is willing to live and die for the God of the Bible.

Through the use of realistic sets and talented actors, Polycarp brings to life the Biblical truths presented in Luke 17:33, 1 John 4:18, and Philippians 1:21 and reveals what it means to be fully dedicated to Christ and His Kingdom, even to the point of death.

Evangelist and best-selling author Ray Comfort calls Polycarp a “God-honoring, Christ-centered, and moving story that will make you want to run with the divine message, while we still have the God-given liberty.”

The Kendrick Brothers–writers, directors, and producers of Fireproof, Courageous, and Facing the Giants–also give the movie a thumbs up: “Polycarp issues a call that resonates with Joshua’s mandate to ‘choose you this day whom you will serve.’ This is the moving story of second-century persecution, reminiscent of the persecution many believers face today.”

Inspired by a true story, Polycarp was written and directed by Joe and Jerica Henline, a brother-sister team that has worked on several films, including Beyond the Mask and Acts of God. Joe and Jerica, who were 17 and 19 when they began writing the script for Polycarp, have received multiple Best Young Filmmaker awards.

Polycarp (trailer below) is available for purchase on Amazon.com and ChristianBook.com and may be sold at your local Christian bookstore.