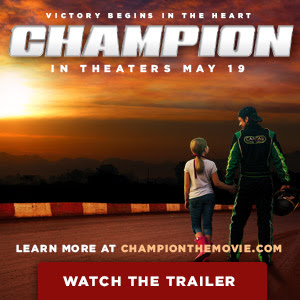 Over the weekend, Mr. Handsome and I had the privilege of screening the movie Champion, slated to hit the theaters on May 19th.

Rated PG, Champion opens as dirt track racer Sean Weathers (Andrew Cheney) is at the height of his career. A single parent to daughter Gracie (Faith Renee Kennedy), he has scores of fans and appears to be unstoppable. But when Sean allows a rivalry with another racer to shift his focus and take hold of his emotions, he finds himself in the midst of a tragedy and must fight to pick up the pieces of his shattered life.

In an unexpected turn of events, Sean meets Jack Reed (Gary Graham), a successful businessman who failed as a father. Sean must work to become someone his daughter can look up to, while Jack must learn how to forgive the person who robbed him of his chance to reconcile with his son.

We thoroughly enjoyed Champion, and we highly recommend it. The film illustrates the life-changing power of forgiveness, a message that desperately needs to be shared. Check out the trailer below, and look for a DVD giveaway in the near future.