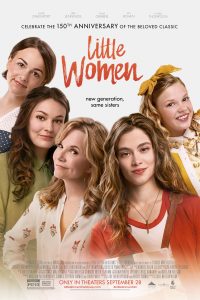 Nearly 140 years after the release of Louisa May Alcott’s Little Women and 70 years after the premiere of the original film comes a modern version of the timeless classic. Four sisters, each with separate dreams and aspirations, navigate adolescence and early adulthood. Through trials, triumphs, and tragedy, they strive to remain true to themselves and loyal to each other.

Little Women opens in theaters nationwide tomorrow, and I had the privilege of pre-screening it. The story is a heartwarming one and is sure to have you laughing and crying along with the sisters. Jo (Sarah Davenport)  is the independent first-born who dreams of writing a best-seller. Meg (Melanie Stone) is the slightly misunderstood second-born who desperately wants to be a wife and mother. Beth (Allie Jennings) is a gentle soul whose love and support for her sisters never wavers. Amy (Elise Jones and Taylor Murphy), the youngest of the four and an artist from an early age, wants nothing more than to be seen as an equal by her three older sisters.

Rated PG-13, Little Women has something for both teens and adults. Younger viewers may not understand the film and should have permission from parents or guardians before watching. With a touch of romance and a whole lot of sap, the movie can certainly be considered a chick-flick. The story is primarily told in flashbacks, and although that isn’t completely obvious from the start, the flashbacks become easier to follow as the viewer gets to know the characters better. The acting is quality.

Movie tickets can be purchased on the official website.