How did you celebrate New Year’s? Mr. Handsome had a three-day weekend, so we left home at 4pm on December 31st and drove six hours to his family’s house, arriving just in time to watch the ball drop and ring in the New Year with sparkling grape juice.The rest of our visit was primarily spent playing board games, watching movies, and pigging out on leftover Christmas cookies. On January 2nd, we decided that we needed to do something active, so several of us went skating at a local ice rink. (Mr. Handsome’s parents stayed home with my 17-month-old niece, and his two brothers were out with friends.)

There were at least 150 people on the rink, which made for some pretty bumpy ice. (Mr. Handsome jokes that we might as well have been skating on gravel.) At one point, my two youngest sisters-in-law and I were all holding hands, with my husband in the middle for stability. 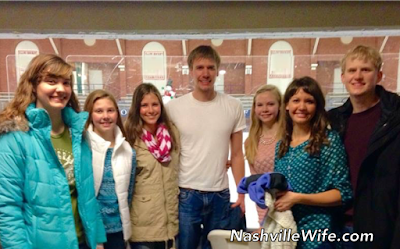