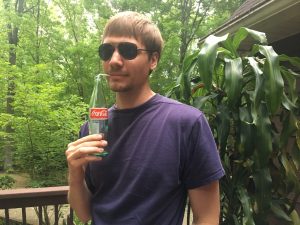 I know millennials have gotten a bad rap for not being willing to work, so I thought it would be good for me to recount my hard day of yard work just to prove that the stereotype is incorrect.

Ellie had a handful of yard projects she wanted me to complete, so I decided that I was going to have a super productive, full day and set my alarm for 7:00am. My alarm chirped, and I woke with a start, ready to accomplish all the tasks on the honey-do list.

However, before getting out of bed, I began an internal discussion as to the wisdom of getting up at that particular moment. “Science says getting a full night of sleep is the key to being productive,” I thought, “and I certainly want to be productive today. Plus, Ellie and Little Buddy are sleeping soundly, and if I get out of bed right now I may wake them up, which would be very inconsiderate.” I quickly realized that getting out of bed at that particular early hour was not in the best interest of anyone, so I hit the snooze button. This was simply the wisest choice and of course had nothing to do with the fact that I had stayed up late watching Andy Griffith reruns and was tired and groggy. And what would 5 minutes of extra sleep hurt anyway?

At about 9:00am  I heard a loud thud in the bedroom. I jumped to my feet only to realize that the sound was my body hitting the floor after being rolled out of bed by Ellie. “Time to get to work,” she announced. I put on my work clothes and was heading out the door when a thought hit me. “In order to work hard and be productive, one has to be well nourished.” Before the door slammed shut, I did a U-turn and high-tailed it to the kitchen. Good protein is necessary for a hard worker, so I proceeded to cook myself a meal of bacon, eggs, hash browns, and pancakes, plus a glass of chocolate milk to wash it all down. After breakfast, I waddled back outside around 10:30am and began raking and picking up sticks.

The next thirty minutes were some of the most productive a person could have. The sun was was out, the birds were chirping, and everything was going great, until I had a startling revelation: I was thirsty. Anyone in the medical field knows that dehydration is a serious problem on warm days, and the last thing anyone needed was me making a trip to the emergency room to get IV fluids. Naturally, the only thing to do was to take a lemonade break. As I sat on the porch with a big glass of sweet goodness, Ellie walked by and said, “Nice to see you working hard.” It sure is good to have a wife who appreciates a man hard at work!

After a lemonade break, I began raking up some dead leaves left over from last fall and was working hard until, unfortunately, the clock stuck noon. Now federal law requires that employers give their employees a lunch break, and I certainly don’t want to disobey federal law, so I decided I had better stop for lunch. Thankfully, there were some leftover BBQ ribs in the fridge that heated up quite nicely.

Over lunch, a thought struck me. The neighbor boy down the street would be going to college soon and surely needed to make some money in preparation. The neighborly thing to do would be to pay him to do the yard work. In fact, it would be selfish for me not to hire him to take care of the yard. I dialed his mom’s number, but unfortunately he was playing video games and was not about to leave his Call of Duty to get paid five dollars an hour to do my lawn. Kids these days just don’t understand what real work is. When I was a teenager, I was overjoyed to get paid 50 cents to mow a lawn.

After a good lunch and a short nap, I was ready to go again. I put in a solid hour when my cell phone rang. It was my good friend calling to tell me about his latest fishing trip. I attempted to talk while continuing my yard work but decided that the kind thing to do would be to give him my full, undivided attention. He started telling me all about the big fish he had just reeled in, and before I knew it, the sun was starting to set, so I had to cut our conversation short.

I worked for another 20 minutes and then decided I had better start cleaning up before it got too dark. Exhausted, I headed inside and laid down on the couch. “Ellie, aren’t you proud of the hard day of work I put in?” I asked my wife.  “Absolutely,” she choked. “It’s such a joy being married to such hard worker!”