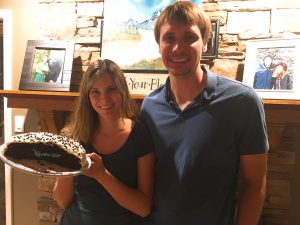 When we first found out we were expecting, we enjoyed keeping the news to ourselves for three months before announcing to family and friends. From the start, I knew that I wanted to find out the gender of our baby at the 20-week ultrasound, and while Mr. Handsome liked the idea of waiting until the birth, he allowed me to choose.

Mr. Handsome was able to accompany me to the gender confirmation ultrasound, which was an emotional moment for both of us. A couple weeks later, Mr. Handsome’s family came to Nashville for an end-of-summer weekend vacation that had been planned earlier in the season, and we decided at the last minute to tell them the news. Sadly, my family couldn’t be with us, but we told them by phone the night before.

I made two, two-layer chocolate cakes and filled the centers with blue buttercream frosting. (Mr. Handsome’s family is too large for just one cake.) 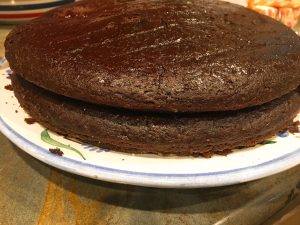 I then covered the tops and sides with white buttercream frosting so the blue was completely hidden. We wanted everyone to think that these were just a couple of ordinary cakes. 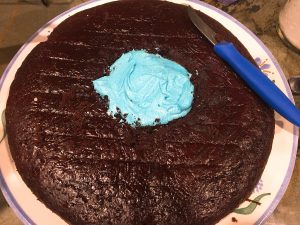 Anne, the sister-in-law who is expecting her third child, arrived with her husband and two kids an hour ahead of the rest of the family. After the six of us finished 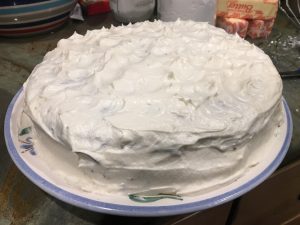 dinner, Anne saw the cakes sitting on the counter and asked for a piece. She is lactose intolerant and had taken a lactaid pill, so she had to consume all her dairy before it wore off.

At that point, no one was expecting a gender reveal. In fact, we had told the family earlier in the week that we were going to keep it a secret for a while longer. Anne would have suspected something was up if we had asked her to wait, so we let her cut into one of the cakes. She was completely caught off guard when she saw the blue frosting and was thrilled to find out that her son will have a playmate just two months younger than him.

After realizing that it was a gender reveal 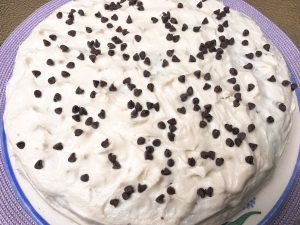 cake, Anne felt terrible, but I assured her that we could just hide that cake in our bedroom and serve the untouched one to the rest of the family. When they all arrived, Mr. Handsome’s 15-year-old sister, Lena, saw the second cake sitting on the counter and said, “I bet that’s a gender reveal cake,” to which I responded, “It’s just a regular old chocolate cake with buttercream frosting.”

By the time everyone had finished dinner and it came time to serve the cake, they were all eager to see if Lena was correct. Mr. Handsome and I played it cool and told them how disappointed they would be if they were wrong. But of course they weren’t, and we got some loud cheers when the surprise was revealed.