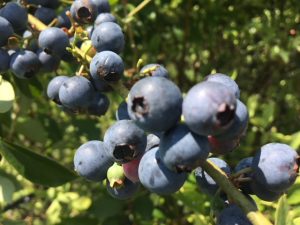 is weekend, Mr. Handsome and I visited a local berry farm. We went to pick fresh blueberries because they are in peak season here in Nashville, but we ended up getting a few blackberries and even some strawberries. The season has ended for strawberries, but there were a few stragglers left on the plants, and they were delicious.

Mr. Handsome is a very serious blueberry picker. I lackadaisically walk down the rows and choose the best berries, knowing that others will come along a few days later to pick the “leftovers” once they have grown a little larger. He, on the other hand, positions himself in front of a particular plant and doesn’t move on until he has picked every single blueberry. 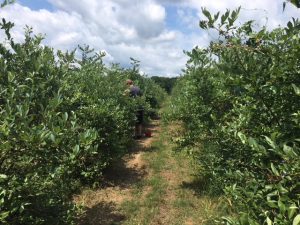 We have picked blueberries together before, but we always get some good laughs out of our differing “methods.” Who knew that blueberry picking could so involved? Thankfully, we chose a day that was a little cooler than the weather we have been having (high 80s versus mid 90s), so it wasn’t as hot as it could have been. 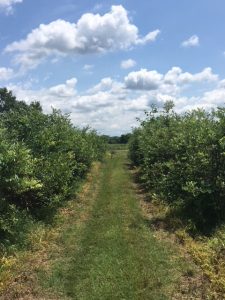 To add a little bit of excitement, we decided to have a competition. Mr. Handsome filled his bucket just a little faster than I did. He claimed that he could have gone even quicker if he had had the “appropriate equipment.” Rather than having to hold the bucket by the handle, he is accustomed to using a string to tie it around his neck so he can pick blueberries “hands-free.” I suppose that would probably be faster. 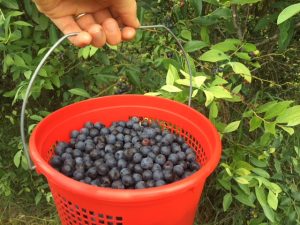 We ended up with three buckets of blueberries (enough to fill more than three gallon Ziplock bags), a bucket of strawberries, and a few blackberries. 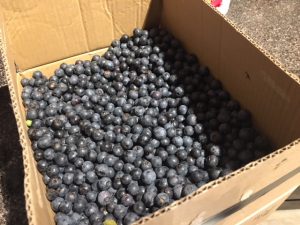 I froze some of the berries, and the others we will eat and use for a blueberry pie (Mr. Handsome’s favorite). With the strawberries, we made a few jars of strawberry jam. Mr. Handsome has been suggesting that I make strawberry jam for years. My reason for not making it has always been that it requires a ton of strawberries (which I would rather eat fresh) and contains a ton of sugar. We have always received a couple jars from friends and extended family each season and have never needed more, but I decided to fulfill his wish. He chopped the strawberries, and I did the canning. 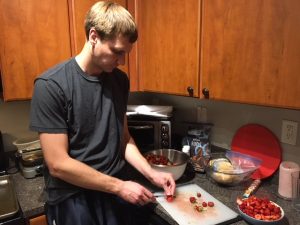 I couldn’t help but beam when he told me how delicious it was. Hearing that from my husband makes it well worth the work! Do you enjoy picking berries and/or making jelly? If you like to can, be sure to check out my canned peach tutorial, my pectin-free peach jelly tutorial, and my apple butter tutorial.

The recipe I used for strawberry jelly was also pectin-free (yum!) Unlike the majority of what I make, I followed someone else’s recipe. The recipe came from AllRecipes, but it’s a pretty standard one. 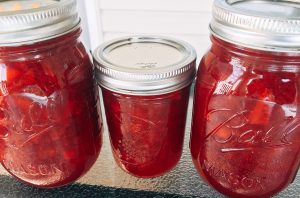