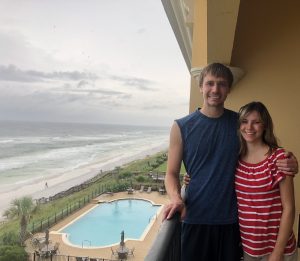 One of the great perks of living in Nashville is that it’s only a seven-hour drive from Santa Rosa Beach. Mr. Handsome and I got engaged on St. Pete Beach (near St. Petersburg), and during our first year of marriage, we spent a few days in the Fort Myers area with friends (their relatives had a condo, so it was free). But until last year, we didn’t know about the beautiful beaches of the Florida Panhandle. It’s no wonder why it’s the top vacation destination among Nashvillians.

We weren’t planning on taking a trip in September, but when our Sunday school class planned a weekend getaway in Santa Rosa Beach, we couldn’t pass up the opportunity. Ten young couples rented two beach condos, and the cost per couple ended up being surprisingly low–about as much as you would pay to stay at a roadside hotel for three nights. We were expecting an older beach house several miles from the shore, and we were thrilled about it. But when we arrived and found this, we were blown away. 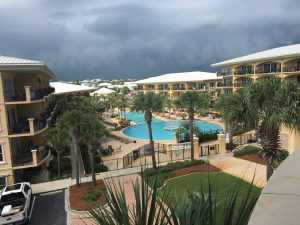 We spent most of the time chilling on the beach. Vacation season was coming to an end, so the crowds weren’t too bad. 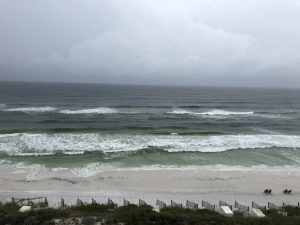 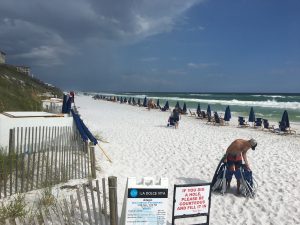 To save money, we made most of our meals at our condos (eggs and cereal for breakfast, sandwiches and hot dogs for lunch, and fresh fish for dinner), but we did eat out at a local Italian/seafood joint. When we arrived, we were stunned to find out that the owner was none other than Food Network’s Chef Emeril Lagasse. After being featured in Food Network Magazine earlier this year, my ears always perk up when I hear about it. Chef Emeril lives nearby the restaurant and regularly stops by to cook for guests—sadly we didn’t go on one of those nights.

The only other activity we did while in Santa Rosa Beach was a deep sea fishing excursion with several of our friends. We ended up catching enough fish to feed our group of 20 two times over. 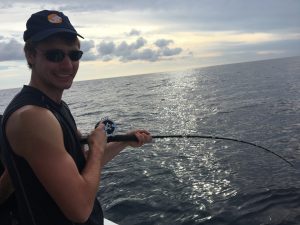 The waves were big that day, and I was almost certain that my pregnant self would be sick the entire time, so I came prepared with my ginger cookies, peppermint tea, and pressure bands. Everyone but me and the other pregnant lady took Dramamine, and by the end of the trip, everyone but me was feeling queasy. The constant rocking about drove me bonkers, but it was better than being sick.

On the way back to shore, we hit a huge storm, and I was terrified. But on the bright side, I think I was too busy mentally preparing myself for a disaster to get seasick. What really concerned me was that the life jackets were not easily accessible. When I asked the captain where they were, he pointed to a cabinet and said he would get them if necessary.

A short while later, as the waves grew and the sky became darker, one of the other women and I asked if he would grab the life jackets, just for peace of mind. It ended up taking him three minutes to open the cabinet. Thankfully, we made it to shore safely and didn’t need the life jackets, but it was still a wild ride. And now we have a story to tell. I tried to snap some photos and videos of the storm, but it was too dark inside the boat, and going out on deck would have been dangerous. I guess you’ll just have to take our word for it.