Thought I would share a picture with you all this evening! Mr. Handsome’s dad does consulting work for school districts across the Midwest. Every November, he hosts a dinner for his clients and their families in downtown Chicago.

Three years ago, I attended the dinner as a friend of Anne (Mr. Handsome’s sister). At that time, I had only met my now-husband a few times, and we were not yet in a relationship. Two years ago, the event took place four months before we were engaged, so I went as Mr. Handsome’s girlfriend.

This year was especially meaningful, as the dinner was on our five-month wedding anniversary. I can hardly believe how quickly time has passed since we tied the knot in mid June!

We were thrilled to find out that my father-in-law had booked a room on the 66th floor of the iconic Sears Tower for this year’s event. (It was renamed several years ago and is now the Willis Tower, but I don’t think too many people actually call it that.) 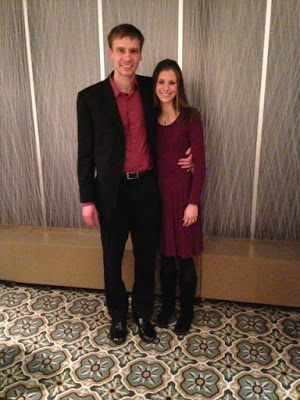