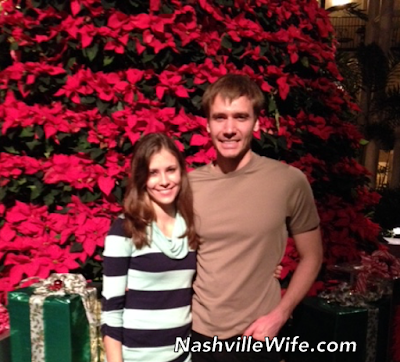 Since the Christmas season began, I have been dropping hints to Mr. Handsome about my strong desire to spend an evening walking around the impressive Gaylord Opryland Hotel, so that’s what we did on Saturday night.

Built in 1977, the Gaylord Opryland Hotel boasts nearly 3,000 guest rooms and is the largest non-gaming hotel in the continental United States. We have never spent the night, but we have been several times to walk around the three beautiful atriums, which cover nine acres and contain approximately 50,000 plants.

It ended up taking us an hour to exit the interstate, which we later found out was due to a showing of The Grinch at the Grand Ole Opry. Then we went to a frozen yogurt shop inside the hotel and ended up paying $20 for two servings. Thankfully, the spectacular Christmas lights were well worth it!