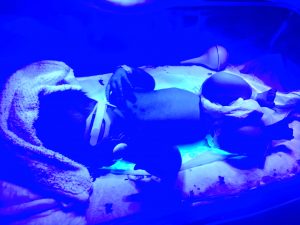 In January, I posted my birth story in a series of three posts. In case you haven’t had a chance to read it, I’ll include the links at the bottom of this post. At the end of part three, I was in a wheelchair on my way to the room where we would be for the remainder of our hospital stay. By that point, Little Buddy was two hours old, and I had been in the hospital for over 24 hours.

I spent the rest of that day (day two of our hospital stay) taking short naps, while Mr. Handsome slept on the couch and Little Buddy slept in his 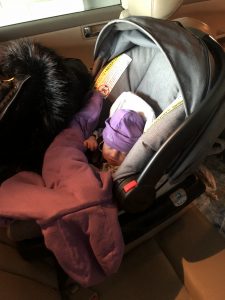 bassinet. From the get-go, our baby had a difficult time nursing. The hospital had wonderful lactation consultants available around the clock, which was a huge help. When Little Buddy was too fussy to breastfeed, they helped me pump and feed him with a plastic syringe. I was shocked to learn that when babies are born, they can only drink a few milliliters of milk, but their stomach capacity grows each day.

My mother-in-law was around for the five days and four nights that we were in the hospital. She spent the nights on my brother-in-law’s couch and the days with us. I was exhausted, but I didn’t really know it because I was on such an adrenaline high. The maternity ward nurses were all so kind and down-to-Earth, and they all wore hot pink scrubs, which made the whole experience of having a baby feel even more “feminine” than it already was. 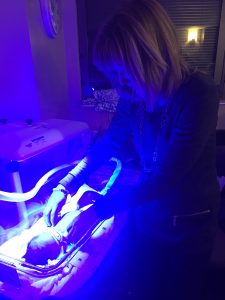 a had an extensive menu, and the food was delivered right to my room. I felt like a queen, being able to order anything I wanted, and surprisingly, it was quite good. Granted, the vegetarian lasagna looked and tasted more like noodles covered in mozzarella cheese, but it was still very tasty. We had a good laugh because everything they brought had a fancy cover over it, like you see in upscale restaurants. Even the chicken broth that I ate while I was in labor, which was in a cheap, Styrofoam bowl with a plastic lid, was under a fancy cover.

The day after Baby was born (day three of our hospital experience), I was feeling good enough to go outside for a walk. The weather was warm, so Mr. Handsome stayed with Little Buddy while my mother-in-law and I took a stroll around the block. It felt great to get some fresh air, but after about 10 minutes, I was tired and sore and eager to get back to my baby.

We would have been discharged on day four (when Little Buddy was 48 hours old), but the routine testing determined that he had jaundice. The nurses brought a big blue light into our room and set it up over his bassinet, and he had to lay under it for 24 hours. He was only able to wear a diaper, so we cranked up the heat, which made sleeping quite uncomfortable. We could only take him out from under the light for 30 minutes at a time, to eat and be changed.

Little Buddy was fussy and required someone to be holding his hands for pretty much the entire time, which was difficult but incredibly adorable. That night, Mr. Handsome and I got some much needed sleep while our mothers took turns holding his hands (while wearing sunglasses to protect their eyes). It was quite a sight to behold. 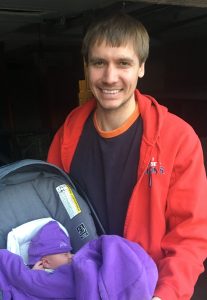 The next morning, the nurse took Little Buddy to the nursery to wait for the pediatrician to arrive. Mr. Handsome and I accompanied him, and we were glad that we did because there were several babies in there alone, and they looked so lonely and helpless. We held our breath as the doctor arrived, praying that he would sign our discharge papers. He did, under one condition: We had to take Little Buddy to our family doctor for a checkup the following day.

Leaving the hospital was a wonderful feeling. By the time we filled out all the paperwork, had the nurse check our car seat for safety, payed our bill (gasp), and loaded everything into the car, it was about 2:00. We picked up food at Chick-fil-A and then stopped by Walmart for groceries. My mom stayed in the car while Mr. Handsome and I shopped. It was kind of like a mini date. We made sure to load up on hand sanitizer when we returned to the car. We had a relaxing evening at home. Mr. Handsome returned to work the next day, and my mother and I took Little Buddy to the doctor. My mom stayed for five days, which was a huge help.