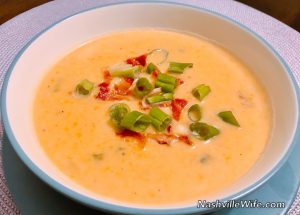 While planning meals for the week, I decided to try a few new recipes. I’ll admit that Mr. Handsome was a bit nervous when he heard, but he has been pleased with the results so far. Two nights ago, I experimented with potato soup, and we both loved it.

Picture a loaded baked potato in soup form, and that’s exactly what this recipe tastes like. It takes a bit of time to make but is so worth it. This soup is creamy and wonderfully flavorful. It’s not an especially healthy meal, although it does contain a decent amount of vegetables and has less fat than conventional potato soup. If you want to make it healthier, you can substitute some of the potato for more yellow squash. You can also use more milk and less heavy cream, but expect a runnier soup if you make that change. 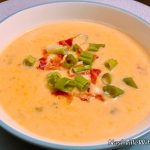