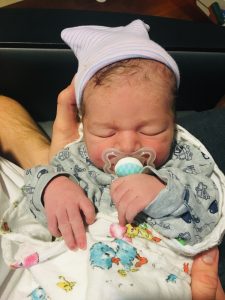 We have a baby! Mr. H Jr. arrived safe and sound after a long labor (details coming soon). He was a big boy (8 lbs 12 oz), and we had to stay in the hospital for five days and four nights, but Jesus brought us through, and our baby is healthy and adjusting well.

Aside from the intense pain, the worst part was not being able to eat anything but clear liquids. I had to fast starting nine hours before my induction, so by the time the baby arrived, I was feeling so out of it that I couldn’t think straight. About 10 hours into the labor, I started feeling like I was slowly losing it, which was scary. We eventually decided that “cheating” was better than passing out, so my mother-in-law snuck in some saltine crackers. Mr. Handsome was very strict and only let me eat a few every hour, but it made a big difference in how I felt.

The minute the midwife finished stitching me up and all the nurses had left the room, we called my father-in-law, who had been at my brother-in-law’s house doing some home improvement projects, and he ran to Panera and bought me a sandwich and a bowl of mac n cheese, which I proceeded to stuff in my face as quickly as I could. The feeling of intense exhaustion lingered, but at that point, I had my sweet baby in my arms, and it no longer mattered.