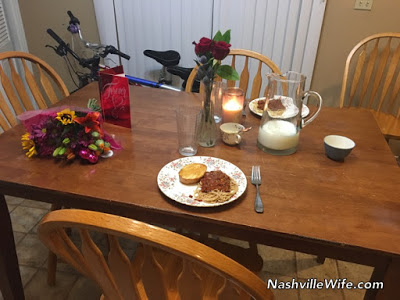 Mr. Handsome and I celebrated Valentine’s Day two days early this year. He is on a basketball league, and someone accidentally scheduled a game on February 14th (probably a single male). Mr. Handsome offered to skip, but I told him not to. The team is small, so if he didn’t show up, chances are good they would have to forfeit.

Rather than take me out to dinner, Mr. Handsome decided he would prepare something at home, which was very thoughtful. I don’t have a favorite food, so it wasn’t easy for him to figure out what to make, but he ended up cooking a delicious meal.

We stopped at Walmart on Saturday night to pick up a Redbox movie, and he ran in to pick up ingredients. When Sunday evening rolled around, I stayed upstairs while he cooked. Towards the end, I could tell by the smell that he was whipping up some sort of pasta dish.

It ended up being spaghetti with a homemade meat sauce that he made without a recipe (the tastiest I’ve ever had) and homemade garlic bread that was toasted to perfection. He also bought flowers, wrote a card, and pained this beautiful flamingo (the perfect choice because I love birds).

How do you celebrate Valentine’s Day? 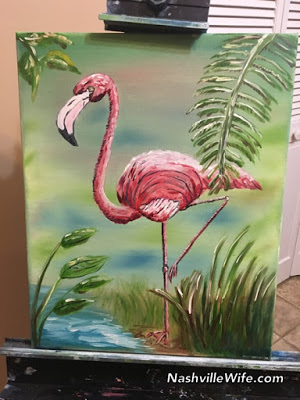