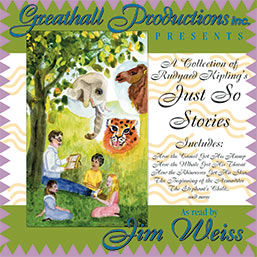 Earlier this year, I raffled off four copies of The Jungle Book, as read by Jim Weiss. Mr. Handsome and I had the honor of meeting Jim, a world renowned storyteller, and his wife, Randy, at my brother-in-law’s wedding in December. I graciously took them up on their offer to send material for two giveaways.

Since the inception of Greathall Productions in 1989, Jim has
recorded more than 60 audio recordings of beloved stories under that
label,
including The Jungle Book, A Christmas Carol, Arabian Nights, The Adventures of Tom Sawyer, A Tale of Two Cities, and multiple titles by G.A. Henty.

Jim has also created recordings of fiction and non-fiction works for other publishers, including the well-known series The Story of the World
by Susan Wise Bauer. In addition to producing audio recordings, Jim has spent time
traveling as a storyteller and workshop instructor. He has received more
than 100 awards for his work.

Jim Weiss’ recordings can be ordered off Amazon.com and WellTrainedMind.com. He and Randy publish a bimonthly e-magazine, which can be accessed on their website, jimweiss.com, by clicking “View Archives of Past E-Magazine Blogs.”

Follow the prompts on the Rafflecopter widget below to enter to win one of four copies of A Collection of Rudyard Kipling’s Just So Stories, as Read by Jim Weiss.